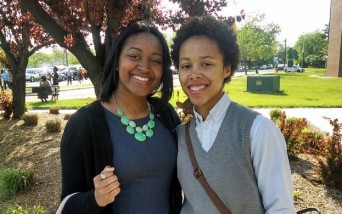 In an article posted by Outsports, a blog affiliated with the LGBTQ sports news website SB Nation, two former University of Richmond women’s basketball players, Leah Johnson and Miah Register, allege that they were victims of homophobia and racism while attending the school.

Johnson alleges that after her freshman year when Register was signed to the team, Richmond’s assistant coach Ebony Tanner Moore demanded Johnson end the relationship.

Johnson and Register, now engaged, said that their relationship was singled out by the coaching staff.

Register shared her experiences with the GO! Athletes blog in May 2013, recounting the difficult times she faced after one of the University of Richmond coaches outed her to her mother. Register was forced to move in with Johnson’s family after an assistant coach contacted Register’s mother to tell her that both players would lose their scholarships if they didn’t end the relationship.

“I was absolutely treated differently,” wrote Register. “Not only for being a lesbian, (which, by the way, no one ever asked, it was just assumed, and because I was less feminine than the other girls, they assumed a lot about me) but or being black, and I was judged for being from an urban area. I was ostracized for being the former – being me – and I was abandoned by my family for the same reasons.”

Ultimately, both women transferred to Fairleigh Dickinson University in December 2011. Johnson ended her basketball career in 2012 after being diagnosed with multiple sclerosis; Register left the team in 2013 citing emotional issues.

In July 2014 the couple founded the Johnson-Register Alliance, a “platform for women, people with disabilities, people of color, and LGBTQ people,” which will be used to advocate for equality and inclusion.