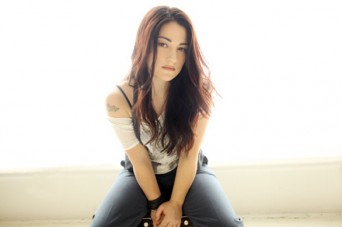 In 2003, Jennifer Knapp had a successful career as a contemporary Christian singer-songwriter. She had sold over a million albums. She had a Grammy nomination and several Dove Awards. However, she was not enjoying her success the way one would expect. She was exhausted, going through what she described as a “crisis of confidence.” She walked away from music and virtually disappeared.

Four years ago, Knapp returned with an announcement that would test the loyalty of her fans and provoke many conservative Christians. She was a lesbian. She released an album called “Letting Go” and began her comeback.

In October 2014, Knapp released a new album called “Set Me Free,” as well as a memoir, titled “Facing the Music: Discovering Real Life, Real Love, and Real Faith.” Both works are honest and emotional and continue to spread what initially gained her fame — her message of love and faith.

Jennifer Knapp took some time to talk about why she left music, her journey back, and how her faith still plays a part in her career.

In 2002, you walked away from a successful career as a contemporary Christian artist. What were the factors that made you leave it behind? Did your sexuality play a part in that?

In general, I left my Christian music career exhausted. I was going through such a crisis of personal confidence to such a point that I simply didn’t have it in me to continue wrestling my private needs while living such a public life. I had so many issues weighing me down: crisis of faith and questions about whether or not I even wanted to be a Christian “on display”. I had a host of philosophical doubts about my role in the industry and many questions about what, if any of my own faith experience I was willing to share in public. Looking back, I’d have to say that my sexuality had a part to play in it,sure, but it was more of a symptom of need rather than a catalyst. It was, however a huge wake up call that I needed to start taking my mental and physical well-being a lot more seriously, and so, I did.

In 2010, you came out and also released a new record “Letting Go.” What was the reaction of your fans after you came out?

I’ve experienced the entire, perhaps predictable spectrum. There were fans absolutely celebrating with me, the joy of returning to music after having come back from such a dark place, all the way to having CDs sent back and hate mail. There were Christians who went out of their way to be supportive, while others angrily insist I could never claim my Christianity again. Good or bad, though, my coming out has definitely been a significant factor for many of the fans I’ve lost and kept since coming back.

What is your relationship with your earlier, more faith based records, “Kansas,” “Lay It Down,” and “The Way I Am”?

There are a handful of songs I still play live, but I’m pretty selective about when and where they get played. There are some personal, faith-based reasons why I won’t play some and there are some I just don’t enjoy playing. In the end, I suppose like any artist performing their own stuff, you keep playing what speaks to you and leave out what doesn’t fit.

In what ways has your music evolved since these earlier releases?

I’d like to think that, in general, that my overall skills have matured. I like more of what I write these days, lyrically, melodically, structurally — yet I don’t know that I’ve experienced a great sonic shift either. I think if there’s been any major evolution, it’s been one more of confidence and philosophy. I’m not a 20-year-old kid any more. I don’t feel that once nagging pressure to have to out-sing or out-write the last song in order to keep moving forward.

What is the song you are most connected to on your new album?

It’s hard to pick really, because just about every song has a moment that is so deeply personal. Today, it might be “Neosho” and tomorrow “What Might Have Been.” It’s more likely that one or two over the course of time might slip out of use, but for now, any one of them could be my heart’s cry for the day.

You have a book, “Facing the Music: My Story”, that just came out. What were your reasons for writing a memoir?

Mostly, I just wanted to take a moment to ask myself “how did I get here?” Especially after coming out, it was a question asked of me so many times, it seemed like the timing was right to sit down and reflect. From growing up in a small country town, to being a Christian pin-up girl, to coming out and questioning everything my faith community had ever taught me, I really wanted to go back and trace the path of what felt like was a fight for survival.

Based on your history as a Contemporary Christian musician, I am sure people tell you that homosexuality is a sin. What is your response?

It’s not like I have a standard response, but the place I usually try to get to is one that moves away from any Biblical debate and moves toward the testimony of what it’s like to suffer under that teaching. So much has been said to defend one theological position or another, but what we’ve really missed out on are the everyday people, families, LGBTs and their allies that have been caught in the crossfire. I think we need to move away from our tendencies to talk about our varying beliefs as Christians (of which there are many) but rather, get back to the business of defining our faith by how we love our neighbor. There’s really not much to debate now that the lines have been drawn, either you do or you don’t think LGBT love is a sin. The belief you hold doesn’t make you a Christian, it just let’s people know what kind of Christian you are.

You have stuck to your faith. What are people’s reactions this this?

Whether the response is from people in the church, those who have left the church or don’t care about religion, the kinds of reactions I get almost always depend on the backstory of the person making their commentary about my experience. For some LGBTs who have spent their lives serving and worshiping in full view of the pulpit, it makes sense that they’d be happy that I call myself a Christian. On the other hand, I’ve heard plenty from those who have been hurt, discriminated against or cast out, who question why I would stay. There will always be people who insist they know the best path for you or that they know what you need. It’s not that that can’t be an act of true enthusiasm and love, but in the end, each of us have to be responsible and honor our own conscience and experience. It’s in that way that claiming my faith and being honest that I’ve kept it has been very similar to coming out as a lesbian. Not everyone gets it. I don’t always have the words that will convince anyone that I’m legit, but there’s what I know and what I’ve got. It’s all any of us have, our experience. Our story. The real challenge is giving each other a wide enough path to travel it and for each of us to learn how to move ahead without destroying everything in our path.

Does your faith still play a large role in your music?

It has a role to play in my life personally, so I suppose there’s a trickle down into my music in some ways. I hope that what shows up in my music is a reflection of what’s going on in my life, yet, just like when you meet me on the street, or we sit down to have a coffee, I would rather the impact of faith in my life actually shows up more in my actions—to the benefit and joy of my neighbor — rather than it be a message of words. Compassion, love, forgiveness,a sense of something deeper than what I can see — I’d like to think are some of the themes that are woven through all my expressions in some way, but it would be a mistake to confuse that with any interest in writing music for the sake of promoting religion.

If you could take back one lyric from a song you wrote, what would it be?

A lot of LGBT folks living in the church world have used that song almost like a talisman of religious shame. It’s too easily confused for a song that encourages reparative therapy or self harm. That’s exactly what I was trying to point out to the church, that not every metaphor in the Bible was meant to be literal, and in doing so, it causes more harm than good. Yet in trying to make my point, some couldn’t avoid the shaming tactics I was meaning to criticize in the first place.

I want the songs that I write to inspire confidence, a sense of self-worth and hope…this song failed that for way too many, I think.

Who are your influences?

Well, I hope in all of the years I’ve been amazed and listening their powers have rubbed off…the likes of Tracy Chapman, Natalie Merchant, Cowboy Junkies, Patty Griffin, Jonatha Brooke, Mary Chapin Carpenter, Amy Ray and Emily Saliers, U2, Dave Matthews and the list goes on. Their poetry is what inspires me most. They write music that echoes in your heart for a lifetime. They never seem to write music just for the sake of selling records or themselves. There are no B sides, they are always cutting to the marrow.

The balance of 2014 is skipping around in support of “Set Me Free” and “Facing the Music”. One day I’m singing, next I’m doing book readings, then after that speaking to the LGBT faith conversation. This fall I’m doing a little bit of everything. The plan getting into Spring 2015 is putting a nice tour together in support of the album.

For more information about Jennifer Knapp, visit her website, jenniferknapp.com.