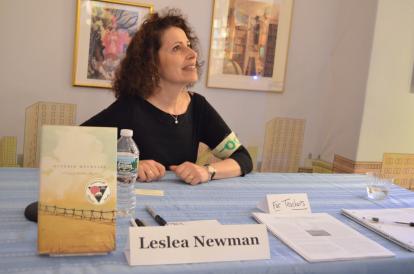 
Lesléa Newman shot to fame in 1989–her groundbreaking children’s book “Heather Has Two Mommies,” with its warm and loving depiction of a child and her lesbian parents, was celebrated in some circles and banned in others. In the ensuing years, she has written or edited more than 60 books, including “A Letter to Harvey Milk,” “The Boy Who Cried Fabulous,” “The Reluctant Daughter,” “Nobody’s Mother,” and “Write from the Heart.” Her recent book “October Mourning: A Song for Matthew Shepard” (Candlewick Press) is a moving and evocative response to Shepard’s death, and was almost 14 years in the making.

“October Mourning: A Song for Matthew Shepard” has been recommended by many teachers and children’s library groups, and has won several young adult book awards. This is not a typical choice of literature for children or young adults. Can you say more about this?

I don’t think we give teens enough credit. They are passionate about injustice and are hungry for true stories that will inspire them to make the world a better place. I think teens deserve to know the truth about the world they are inheriting. I have been very inspired by their reactions to the book, and to the presentation I give, He Continues to Make a Difference: The Story of Matthew Shepard. At the end of that presentation, I ask the audience to make a commitment to do one specific thing to make the world a safer place for the LGBTQA community. So many teens have said things like, “I’m not going to use the word ‘fag’ anymore,” or “The next time I hear someone say, ‘That’s so gay,’ I’m going to call them out on it.” It takes a lot of courage to stand up in front of your whole school and make a statement like that.