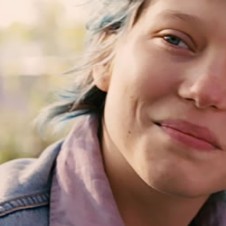 There’s a moment toward the end of French film “Blue is the Warmest Color“ when actress Léa Seydoux runs her fingers through her short blonde hair. She rakes it from forehead to crown. Ducking her head, she pauses to peer up at her love interest, then cuts her eyes away. Her hand travels back toward her face then, her hair artfully disheveled in its wake. It’s the sort of arresting moment anyone who’s ever been in love with a dyke recognizes. Not just recognizes, craves. It’s why all the bluster is worth it.  It’s why you show up. But this is not the sort of moment most critics have chosen to highlight. Rather, the movie’s buzz has centered around The SEX! Comprising 20 minutes of the three hour film, the sex scenes’ duration and specificity earned “Blue” an NC-17 rating.