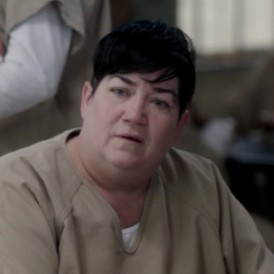 “Orange Is The New Black” is easily the biggest new hit of the summer, and the groundbreaking Netflix series from “Weeds” creator Jenji Kohan has introduced us to a bevy of unconventional TV actresses. rom transgender inmate Sophia Burset (played by transgender actress Laverne Cox) to prison womanizer Carrie “Big Boo” Black (play by proud butch actress Lea DeLaria), “Orange Is The New Black” has brought true diversity to the medium.

DeLaria comments: “I went in for this part [as a correctional officer]. I made the tape. I sent it to them. They got back to us saying, ‘Love her [but] we want to look at her somewhere else because the correctional officer was a small role. So then I went in and read for the part that Lin Tucci plays — she’s the cancer survivor [named Anita DeMarco] … and I didn’t look old enough, is what they said,” DeLaria recalled. “I remember I was standing in my manager’s officer and I lost it. I just went, ‘They’re making a television show that takes place in a women’s prison and there’s not a part for me? Then I f***ing quit! I’m out of showbusiness for good.’ I got on a plane and I flew back to London, where I lived at the time, and said, ‘You know, f*** it. F*** America. F*** it’ … And when I got off the plane and went through customs, there were like 1,000 messages from my manager going, ‘They wrote a part for you … and come back because you’re going to start shooting in five days.'”