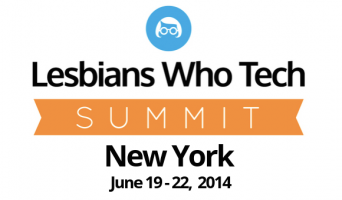 On the heels of the wildly successful Lesbians Who Tech San Francsico Summit, organizers have announced plans to bring a similar event to New York City, but need your help to do so.

Lesbians Who Tech, founded by Leanne Pittsford, is a community of queer women in technology and the people who love them. Just over a year ago, the organization began hosting Lesbians Who Tech happy hours to bring together queer women across the tech industry. The concept caught fire and quickly grew to include over 3,000 people in 14 cities worldwide.

In early March, the group organized the Lesbians Who Tech Summit in San Francisco. The event brought together 800 queer women, incredible speakers, a hack-a-thon for social good and featured weekend events like a bike ride and brunch.

You can support the campaign by purchasing your early access ticket at Indiegogo today. At press time, just 15 hours remain in the campaign, with $17,836 raised toward the group’s $20,000 goal.

The Lesbians Who Tech New York City Summit will be held at Tishman Auditorium at the New School, in Union Square.