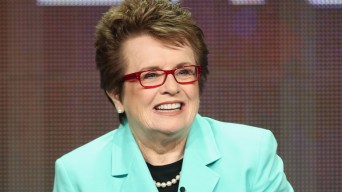 Billie Jean King is headed to Sochi after all.

The openly lesbian tennis legend was originally named to the U.S. delegation slated to attend the Winter Olympics opening ceremonies on Feb. 7. However, her mother’s failing health forced her to withdraw from the contingent.

AP reports that the White House named King on Friday in an updated five-member delegation that will represent the United States at the closing ceremony on Feb. 23. It will be led by Deputy Secretary of State William Burns.

“I will use this trip to honor the memory of my mother and to further my mission of equality,” King said in a statement to The Associated Press. “I am thankful to President Obama for including me and I look forward to supporting the men and women of Team USA in Sochi.”

King’s mother, Betty Moffitt, passed away on Feb. 7 at her home in Prescott, Ariz., at the age of 91. King and her brother Randy Moffitt were by her side.