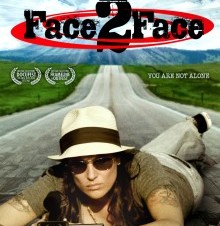 After a serious surgery, Emmy Award winning Producer and Director Katherine Brooks (“Loving Annabelle,” “The Osbournes,” “The Newlyweds,” “The Real World,” “The Simple Life”) suddenly realized that though she had thousands of Facebook friends, she had no true friends in real life. Not one single person came to visit her. No one sent flowers. She was alone. It was then that she decided to post a Facebook status stating that she would visit the first 50 people to comment. After an overwhelming response, she pulled herself out of bed and for the first time in months, felt like her life had purpose.

The once reality TV director had one goal during this film. She wanted to make a documentary that was 100% real and transparent. She refused to shy away from the messy parts of her life and in doing so, showed a beautiful story of personal transformation. During her quest, she not only struggles with her addiction, but also shares the very emotional and tumultuous story of her childhood and openly talks about how it has affected her adult life. She even reunites with her first love and inspiration behind “For Emily”, a lesbian short film about a teenage girl who writes a love letter to her female best friend and then watches in horror and humiliation as the she reads the letter aloud to her friends.