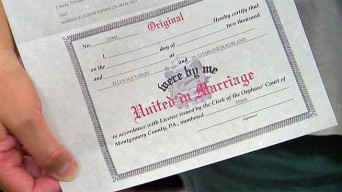 A Pennsylvania judge on Thursday ordered a clerk in a suburban Philadelphia county to stop issuing marriage licenses to same-sex couples, saying only the state legislature or a state or federal court had legal authority to overturn the state’s ban on gay marriage.

The ruling came two months after Montgomery County, Pa., Register of Wills D. Bruce Hanes startled state officials by deciding on his own to begin granting marriage licenses to gay and lesbian couples.

Hanes, who is in charge of the county’s marriage license office, said the U.S. Supreme Court’s decision in June overturning a section of the federal Defense of Marriage Act on grounds that it was unconstitutional also invalidated the Pennsylvania law prohibiting same-sex marriage.