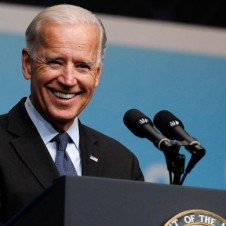 Vice President Joe Biden retreaded his support for gay marriage in a speech at Sen. Tom Harkin’s (D-Iowa) annual steak-fry fundraiser on Sunday. Referring to a 2012 incident in which “Meet The Press” host David Gregory asked Biden whether he was “comfortable” with gay marriage, “A lot of people criticized me for speaking out, not long ago, about gay marriage. I could not remain silent any longer,” he said. “It’s the civil rights of our day. It’s the issue of our day.”

Biden publicly defended gay marriage only a week ago, at the 19th anniversary celebration of the Violence Against Women Act. In touting the recent reauthorization that extends protections to members of the LGBT community, Biden once again recalled the 2012 interview in which he beat the president to announcing support for gay marriage.