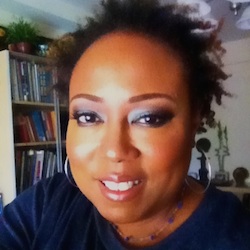 
Charzette Torrance is the creator executive producer of upcoming webseries, “Jillian’s Peak” The web series is based on the true story of Torrance herself, as a queer woman of color in conflict.

The series starts with Jillian Thomas, who is a photographer, married to a man and living in Detroit. Questioning her sexuality and possible attraction to women, Jillian moves to New York to find some answers. In this interview, Torrance shares how “Jillian’s Peak” came to be and the state of queer women of color in the media.

“Jillian’s Peak” is the story of a married woman, who moves to NYC to find herself. In this case, that means exploring her sexuality and the possibility that she might be a lesbian. Why did you decide to share this story? Why do you think it’s important?

When I was in my hometown, Detroit, many other lesbians of color, had spoken to me about how there was not any visual portrayal of themselves in the media &#!51; they couldn’t find anything about lesbians of color in anything.

I mean, “The L Word” was one of the hottest shows ever known to womankind. However, the consensus that was gathered was that it did not represent “me,” but what else was there? Now, that it’s over, there’s an opportunity to step in with what we, as lesbians of color, need. So I thought, “Why not?” I collaborated with another writer to write “Jillian’s Peak” the movie, it was originally a movie. Then we entered it in the Creative World Film Festival for a script writing review. It got great reviews and the judges suggested we turn it into a TV series. After doing some research and meeting with business partners, I turned it into a web series, which is why it’s taken five years to get to this point.

The main reason is that we, as a gay community, are known as “the rainbow” and within the rainbow there are so many different stories that can be told of different races and different people, that need to be told. Not what the media pays attention to, but what our experiences actually are.

When the football player (Michael Sam) came out he was like, “I’m proud, black and I’m gay” and when Cheryl Swoopes, or when black females come out, they are like, “I just happen to be in love with a gay women,” or “I just happen to be in a lesbian relationship.” So black females don’t have much to look up to in the media. Society, the church and all this stuff, I’ve been out all my life. I would love for someone to some out and be like, “I’m a lesbian and I’m African American.”

“Jillian’s Peak” is loosely based off your own personal journey. Does that make it easier or more difficult to write the series?

Both! It’s easier to tell the story because I lived through it. But scriptwriting takes planning and that’s where it gets difficult. I may not remember what people might have said, but I remember the events that took place. You also have to add more drama to the story, you need to have a coherent storyline.

It’s hard to include your flaws and your faults into the storyline, as a writer. How is it watching that play out?

During the casting, we had to watch people reading my life. One actress was so good that I just cried! It was like, “people have to see this?” [Laughter] Certain parts of the readings bring back memories that you have to deal with in that moment. It can be emotional.

Will Jillian’s story have a similar ending to your own?

The story is so much like my life, but the ending is a big surprise. That’s why you have to stay tuned!

Do your friends and family ever worry that you will write something revealing about them in your work?

No, because life always imitates art. If people can learn from our life lessons and grow and if we can help someone by exposing our life, to me that is the greatest human connection and gift to share.

Does your ex-husband know about the series? Is he cool with it?

Me and my ex-husband, when we got our divorce we were not in each others lives. Sometimes you get married young and you have no idea what it’s really like. He’s not really involved. It’s really more about Jillian’s journey. Wanda Sykes, and other actresses have come out after being married. So it’s something that’s happening in real life.

There’s not much representation of queer women in color in media. Do you see that evolving anytime soon?

I do believe it starts with us. Doing this web series is really our first project for our multimedia channel. We will have a lot of new content. “Jillian’s Peak” is going to show the gay community lives their lives. We will show is how it is supposed to be shown, like everybody else. This is very important. I liked “Queer as Folk” and I loved “Noah’s Ark” and “The L Word,” and we want people to love “Jillian’s Peak.”

Our networks are our friendly and family and loved ones and it’s a show for queer people of color.

We plan to provide on-demand content media about us. It’s attuned to the life of who we are. It’s very important right now that the programming that we have, we take it very seriously.

What differentiates “Jillian’s Peak” from some of the other web series that are currently out there?

Most of the women of color web series that you see online are stud-oriented. That’s OK, but there is another side to dealing with sexuality in a gay life other than stud drama. I am going to tread lightly on that statement! That’s what you see.

And secondly our programming needs to be taken seriously enough to be picked up by HBO, Showtime, Netflix. I want “Jillian’s Peak” to break that ground and for other shows to reach the same plateau under our umbrellla. Also, as a gay community, once again to show our lives, exactly who we are and what we are about. None of that flow. Just simply tell the truth.

When is the first episode of “Jillian’s Peak” available online?

We have raised one third of our funding ourselves. And we are having a fundraiser September 30 at 6pm at the Leslie Loman Prince Street Project Gallery on 127-B Prince Street, New York, NY. Also, the cast will be performing that night.

Once we procure the funding, we will produce the series in the fall and premiere in the spring.

What is the ultimate message or feeling that you want viewers to be left with after watching the first season of “Jillian’s Peak”?

I want them to say this is a great story line, well-produced lesbian series that relates to our lives. For the first time, I can see my life portrayed in the media like everyone else and I want more of “Jillian’s Peak” TV.