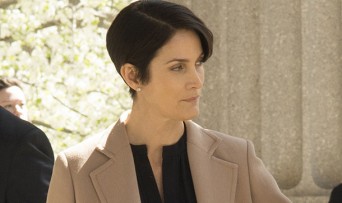 The representation of queer characters on television has made real progress in the last few years. We now have a whole list of shows with interesting and nuanced lesbian, gay, bisexual and trans characters. Things aren’t exactly perfect – it’d be nice if every lesbian on TV didn’t have to die tragically, for example – but there has been real and undeniable progress. The next frontier then, for us queer pop culture nerds, is diversifying the stories queer characters are allowed to tell and the roles they are allowed to occupy in those stories.

Most of the time, when we see a queer character, their queerness is both a defining character trait and the primary purpose for their appearance within the story. The “coming out” narrative, the “discrimination” narrative, these are the boxes that LGBT characters are stuck in. There are very few examples of a lesbian character appearing in a show – especially a genre show – where their sexuality and/or gender identity is not their primary reason for existing.

This is one of the many reasons why Netflix’s gritty new superhero show Jessica Jones is such a breath of fresh air. With a fresh feminist tone, a genuinely badass female protagonist and a surprisingly frank (for a Marvel show) approach to subjects like abortion and rape, this is not your average comic book adaptation. Even within a show this cool, the character of Hogarth stands out. A tough morally grey lawyer that Jessica – a P.I – works with, she is played with steely sexiness by Carrie Ann Moss. The fascinating thing about Hogarth, though, is that she is a lesbian – married to (and divorcing) bleeding-heart doctor Wendy in order to take up with young sassy personal assistant Pam – but the word “lesbian” is never used. Hogarth’s sexuality is never addressed, questioned or highlighted. Her sexuality does not define her character and her arc throughout the explosive first season, though it does focus on her love life, is not about coming out or discrimination or any of the typical queer character storylines. Now isn’t that refreshing?

Hogarth has the potential to be the template for a new approach to diversity in television. By allowing her to exist within the Marvel universe without explanation or comment, the writers normalize Hogarth’s sexuality. Interestingly, in the comics Hogarth was a man. This gender swap could have been done by switching her wife to a husband, her mistress to…whatever the male equivalent of a mistress is. Choosing to make Hogarth an unambiguous lesbian is a bold and important choice for a franchise as high profile as Marvel. I can only hope it will insight a trend in bringing characters who happen to be gay – or trans, or otherwise queer – in a way that does not limit or define them to our screens. Who knows – gay superhero next?