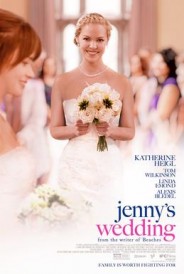 Written and directed by Mary Agnes Donoghue, starring two darlings of the big and small screen as well as some seasoned character actors, the recipe was all there for Jenny’s Wedding to be something beautiful, an instant classic. It becomes apparent however when watching the film that Donoghue’s talents lie more in crafting scripts for moving adaptations of novels than in writing and directing an original screenplay from scratch. The film, while it has many redeeming features, is flawed and, ultimately, somewhat disappointing to those of us who have anticipated its release with some excitement.

The story revolves around Jenny (Katherine Heigl), a social worker whose secret relationship with her supposed roommate Kitty (Alexis Bledel) is ready to go to the next level – she wants to get hitched and have babies. Only one problem, her family don’t have any clue she’s gay and she has a feeling they won’t be super happy. Her instincts are right and her mother, worried about what the neighbours in her conservative suburb will think, forces her to keep it secret, even from her siblings. The rest of the movie is mostly intense, cliché-laden conversations, with occasional moments of genius provided by Linda Emond and Tom Wilkinson as Jenny’s repressed but loving parents.

Heigl gives a moving, authentic performance, shining in the emotional scenes, making the inspirational melodrama work in a movie overstuffed with speeches and heart-to-hearts. Tom Wilkinson is a joy, as always, and his scenes with his wife are some of the best. Their bedtime discussions and simmering resentful dinner scene are a delight to watch, though it all does feel very much like something lifted from a play. This is the trouble with the movie in general – massive tonal shifts, lurching from quirky to sentimental, from TV movie to Broadway play. Linda Emond steals the movie with her hilariously earnest and slightly nutty portrayal of Jenny’s poor well-meaning mother. And though the film tries to fit in far too many touching and dramatic scenes, when Jenny comes out to her mother both actors are on form and the heartstrings-pulling dialogue and performances really make it a memorable moment. Jenny’s sister’s subplot of sibling jealousy and marital unhappiness is beautifully played by Grace Gummer but the dead grass metaphor, which starts as clever and insightful, is so overused and overrought that it becomes laughable. What Jenny’s Wedding badly needed was more humour and sass. The scene in which Jenny introduces Kitty to her parents’ friends for the first time at a funeral, in which she utters the lines, “Hey Kitty, my dad wants to know if one of us straps it on in bed” is pure gold. Leaving sentimentality at the door and letting Jenny’s defiant bitterness after years in the closet come rushing out, to the general dismay of the buttoned-up gathering and her shy, polite girlfriend, is a rare moment of well-observed humour that the film really benefits from. The score, funded by the film’s Indiegogo ask for post-production money, shifts from pleasant to saccharine and the pop songs chosen for the soundtrack are way too on the nose, as much as I love Mary Lambert.

My principle issue with the movie was that I just really didn’t buy Jenny and Kitty’s relationship. They don’t even touch, in any way, until almost 30 minutes into the movie and their relationship doesn’t seem anything but chaste/awkward until the explosion of chemistry during the cake cutting scene at the end. When I saw them sensually, playfully stuffing cake into each other’s mouths and smooching with relish, I couldn’t help but wonder, “where was this love throughout the movie?” The ironic thing is that Kitty seems like she actually is just Jenny’s roommate. Their relationship just doesn’t read as a romantic one at all.

Jenny’s Wedding is an important film, that’s undeniable. It stars some beloved actors and focuses on a topic that is worth exploring. In this post-marriage equality world, we will likely begin to see many more films like this, looking at the family tensions that arise, the ways in which traditional families deal with the new attitudes towards queer love. This one, arguably the first of its kind (mainstream, accessible) may be flawed, but it still matters.