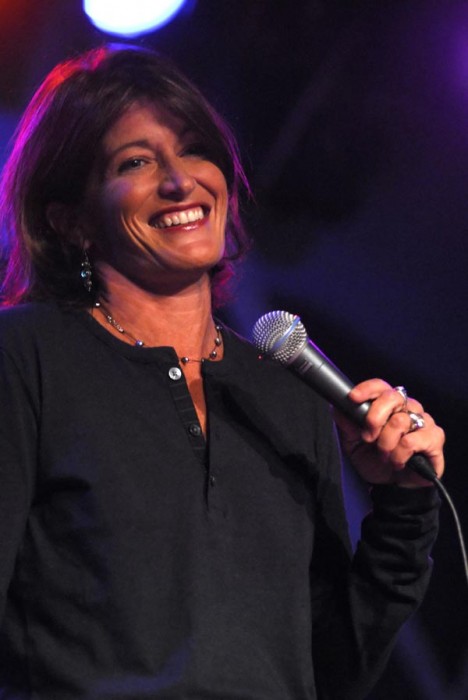 Jennie McNulty has traveled the world doing comedy, literally.  She headlines at comedy clubs across the United States and Canada, spends her summers performing nightly in Provincetown, Mass.; stars as a regular at Harrah’s Casino in Las Vegas; travels as a featured performer on Sweet vacations; and has entertained our troops overseas. McNulty has had smash performances at Dinah Shore Weekend in Palm Springs, Calif., and is a hit at the countless gay and lesbian comedy festivals at which she has appeared. McNulty can currently be seen on two “One Night Stand-Up Logo Network specials as well as the web’s only “walking talk show,” “Jennie McNulty’s Walking Funny With…” on AfterEllen.com.

You have entertained the troops in both Iraq and Afghanistan. Kudos to you! What are some of your favorite memories of these experiences?

Every minute! I love meeting the military personnel over there. They are so diverse and interesting. And they work together under some pretty hairy conditions. They are very cool. Thank one if you see them out in uniform.

They thanked me for “taking my mind off of where I am.” If I heard that once, I heard it a million times. It’s the least I could do. I can’t enlist. They do things way too early and I’m a chicken, so it was truly my pleasure. I had a blast!

From a civilian “I’m only here for two weeks” point of view, it was complete fun and excitement. I’ve been able to ride in cargo planes and Black Hawk helicopters; I rode in a convoy through Baghdad, stayed at Sadaam’s “Guest Palace,” and met generals at command headquarters. I’ve even (allegedly) fired machine guns at a target range. I would not make a good sharpshooter, yet another reason for me not to be on the military roster. Although I do actually kind of dig their discipline.

You play women’s professional football for the California Quake. When did you start playing football and what position do you play?

I started playing in 2002 and I play defensive back (and 14th-string wide receiver). It is, without a doubt, the most fun sport, and to be able to play is a dream come true for me. I have loved football since I was a kid and, when I was growing up football was just one of the many things girls “couldn’t do.” If you think watching it is fun, take that times a billion, and that’s what playing is!

What do you think is the key to being funny?

Finding the truth in a situation and then pointing out an absurdity in that truth. Then, doing so with regularity.

Who has been the most influential person in your career?

Cher. Every time I write a joke, I think, “Would Cher think that’s funny?” I’m only half kidding. I’m a huge fan — used to think I was her No. 1 fan, that is until I moved to West Hollywood — those boys win.

I don’t think there is a “one person” who was most influential. There have been so many people who’ve helped and influenced me at various stages and in different ways throughout my career. I don’t think I could name just one. But, I think, in some ways, everybody’s influential.

Tell us about your most embarrassing on-stage moment.

I did an entire 45-minute show with toilet paper hanging from the waist of my pants to the floor – all the way down, for the entire night. And when I first took the stage I turned around to put the mic stand behind me and the audience started cracking up and I thought, “Wow, I’m killin’ already!” No one said anything. I just did a whole show draggin’ a 3-1/2-foot piece of toilet paper from my belt. It must have been double ply.

Are there any causes, charities or organizations that you support?

Anything sports related; I’m such a huge advocate of sports and physical activity. It’s so beneficial, physically and mentally, maybe more so mentally. And you don’t have to run a marathon, people, just get off your ass and do something. Stand up when you Facebook anything. Although, “if” you Facebook at work, I recommend trying that when your boss is out of town.

And I participated in a fundraising comedy tour for the Independent Women’s Football League, of which my team, the California Quake, is a proud member. I did shows around the country with the teams in our league. In each city, we had special local guests, prizes and, of course, hysterical comedy, if I do say so myself. And it was a great opportunity to raise awareness and money – and for me to steal playbooks.

Who should star in a movie about your life?

Please share with us your life philosophy in 25 words or less.

Treat people the way you want to be treated. And don’t leave cigarette butts on the beach.