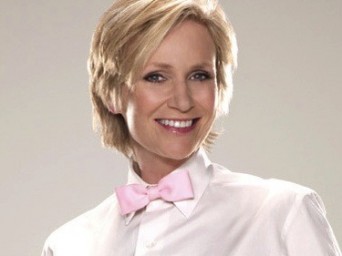 You could argue that lesbian actress Jane Lynch has had more memorable roles on TV these last few years than most actors have in a lifetime. Seriously — the woman never stops working! The Huffington Post caught up with Lynch while she was promoting her latest gig, NBC’s new show “Hollywood Game Night” (more on that before next week’s premiere), and she talked about whether or not she was surprised by the “Glee’ casting shake-up and what’s next for Sue Sylvester.

She also dished about the status of the “Party Down” movie and what she thinks her character Constance is up to today. And then, somehow, the topic turned to Charlie Sheen … will she be popping up on “Anger Management” next? Sounds like it.