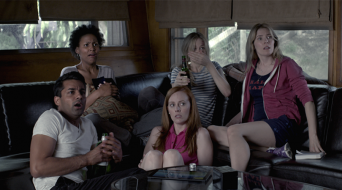 I know what you’re thinking. You already have enough crazy bitches in your life, right? But if I told you that filmmaker Jane Clark wants to introduce you to some “Crazy Bitches” that include Cathy DeBuono, Guinevere Turner and Candis Cayne, wouldn’t you try to make room for just a few more? Yeah, that’s what I thought, and you’re in luck as Clark wants to do just that as she prepares to unveil her second feature film, “Crazy Bitches,” the follow up to her multiple award-winning “Meth Head.”

“Crazy Bitches,” a suspense/horror/comedy in the tradition of “Scream,” introduces us to seven women and their best gay guy friend who head to a remote ranch to enjoy a little down time. One by one the old college friends are mysteriously picked off, done in by their vanity, poor cellular service and horrendous decision-making.

Clark, who wrote and directed “Crazy Bitches” and previously produced the lesbian film favorite “Elena Undone,” spoke with us about her inspiration for the film, the perils of fly pest strips on set and what lies ahead for her with “Crazy Bitches” and beyond.

“Crazy Bitches” makes its film festival debuts this summer with screenings at Frameline SF, Thursday, June 26, 2014, 9:30pm at the Victoria Theatre and at Outfest Los Angeles, Thursday, July 17, 2014, at 8:30pm at the Ford Theatre.

“Crazy Bitches” is a departure from other films you’ve written and directed. Why did you decide to go the comedy/horror/suspense route with this latest project?

Most of my script ideas generate from an experience in my life and “Crazy Bitches” is no different in that way. I was having lunch with a friend, and she said something and I remember thinking, “I can’t believe you just said that to me.” Only it wasn’t to me. It was about her and she was trying to make herself feel better about some aspect of herself. But in the process what she said hit a nerve of insecurity in me and felt a little bit like a knock. I never said anything. I knew she hadn’t meant to hurt me. But it stayed with me, and from that experience “Crazy Bitches” was born. It’s morphed a lot since the germ of the idea, but that is the core. The damage we do with thoughtless words to the friends and family we love.

I am seriously not at all sure when I decided that idea was best represented in a horror movie. I shy away from horror movies because I get too scared. But here I am, and I have to admit I really enjoyed the process.

“Crazy Bitches” will screen at Frameline, the San Francisco International LGBT Film Festival, on June 26. When can we expect to see it available outside the festival circuit?

We are aiming to take it out pretty quickly, actually. We’ll play the LGBT, horror and straight fest circuit through the fall (we will be at Outfest next on July 17th at the Ford Amphitheater) and then if all goes as planned we’ll release in January or Feburary of 2015.

Your previous film, “Meth Head,” which you directed received a number of awards and was met by audience and critical acclaim. Did you feel any pressure coming off that success as you started production on “Crazy Bitches?”

Oh yeah. It’s scary, honestly. You can’t help but think, ‘what if “Meth Head” was the best I could do?’ But you can’t afford to have any doubt going into a production. As soon as the trigger is pulled and money is starting to be spent, all you can do is take a deep breath, dive in and give it all that you have.

Now that the film is finished, what I am learning, however, is that even though I sometimes joke that “Meth Head” is it’s own type of horror film, “Crazy Bitches” and “Meth Head” are two different animals. They have different trajectories and can’t be judged side by side. One is a serious and stark look at addiction; the other is sheer entertainment. We did some focus groups on “Crazy Bitches” as I was editing and I had to get used to people yelling in the middle of the film. Things like “The red-head is next! or” “Don’t go in there!”

Which filmmaker in the horror/suspense genre do you admire the most?

As I mentioned, I really didn’t watch a lot of horror movies before I started working on “Crazy Bitches”, except for the classics like “The Shining’ and “The Omen” and “The Exorcist.” Even those I didn’t see until I was an adult, and at home with the lights on. But once I decided to go for the genre, I re-watched all of those older classics, a ton of new films, and a few slightly older ones like “I Know What You Did Last Summer” and the “Scream” series, which I felt might be closest to the tone of “Crazy Bitches.” I can’t say I have a favorite, although I thought “The Shining” was a brilliant example of suspense versus horror. A recent thriller/scary movie that I thought was really well done and very simple was “House at the End of the Street.”

Ultimately, though, I was a little on my own because while there are some horror and suspense elements, there is also a lot of humor. The film almost borders on absurd at times, because I push the boundaries of believability, not necessarily with the murders but with the situations and behavior of the characters.

The place we shot at, Great Spirits Ranch, has been deemed to be a very spiritual place actually. Tibetan monks donated a yurt to the owner because they felt its spirituality so deeply. My DP and I spent the first week of night shoots in the trailer on the grounds so we could maximize our work time together and I can tell you it is quite peaceful when no one is around. And I had thought that beautiful energy would gift us with a lovely peaceful production. But somehow the shoot went the complete awry.

We had a llama get loose and pigs oinking and interrupting shots. We spent a good 3 hours mucking around in horse manure to shoot one scene, and another we were in the sun without a trailer nearby for the entire day on the hottest day of the summer. We had a serious fly problem at lunch because of the horses nearby. (I caught my hair in a fly strip more than once). On top of all of that we had all kinds of equipment failure — the electricity in the trailers didn’t work, the prop knife didn’t squirt blood, the camera overheated — the list is too long to even go into.

I keep thinking the spiritual gift of the ranch was to challenge my strength and perseverance.

Who was the biggest prankster on set?

Honestly, there wasn’t much pranking, though there was a lot of laughter. When you are shooting a film in 15 days, with on average six cast members on set at any given time and eight pages of dialogue to get through, there really isn’t much time for fooling around. Though I have a feeling that if you asked one of the actors they’d have a better answer. They all genuinely enjoyed each other, became friends through the shoot, and still hang out together a year later.

You’ve worn many hats both in front of and behind the camera – from actress to writer to producer to director. Which of these was your favorite? Which role do you enjoy the least?

I like them all, though Producer is probably my least favorite. I love acting and would gladly jump into a role if anyone asked! But I hated auditioning and the insecurity of that process. Once I get past the treatment, writing is really fulfilling. Once past the first draft, it’s a lot of fun. Directing is probably the most joyous for me because I love every inch of the process, from planning out the shots and imagining the film coming together in my brain, to rehearsing with the actors and watching the characters come to life. I love the collaboration overall, actually — not just with the actors, but with my DP and my key team. Each person bringing talent and creativity to the script in a more complete way than I can ever imagine on my own.

After the energy and excitement on set, I go into what I affectionately call my cave, and get peaceful and singular again, to edit the film and put the final piece of the puzzle together.

Though you are straight, many of the films with which you have been involved have feature LGBT characters. Why do you think you’re drawn to these types of projects?

I am a big believer in following the path that unfolds in front of me, rather than setting a path and refusing to veer. So my filmmaking journey has been dictated by the stories that presented themselves to me. There is a long, connected evolution from film to film to film, that it is too long to explain here. But if I did you would see the logic and sense to it.

But ultimately and most importantly, I don’t really see my films as straight or gay. I see them as stories about interesting and empathetic characters who excite, inspire or move me.

Do you have any other projects in the works right now? What’s next for Jane Clark?

I am setting up a film in Paris called “Slate & Kelly” based on characters that my dear friends John W. McLaughlin and Cathy DeBuono created. It’s about two misfit detectives who are forced to work together to solve a string of murders in a drag club. It’s a sort of classic crime caper with the twist that the detectives are a gay guy and a lesbian. We’ve got a really good French supporting cast and are just beginning to look for the U.S. leads. We’re hoping to shoot that in Spring 2015, dependent on financing.

I am also working a script for on a horror/comedy to star Candis Cayne, which if I can pull it off, should be a hoot.

And I’ve got a spooky, sexy romance — sort of a reverse ghost story — that I’ve written and am beginning to develop.

Is there anything you’d like to tell our audience that we haven’t asked you about?

Just come see the movie! It’s a fun ride that hopefully will have you laughing at the characters and looking over your shoulder when you get back to your dark home.

Learn more about “Crazy Bitches” at www.thecrazybitchesmovie.com and get a sneak peak behind the scenes of the film in the promo trailer below.