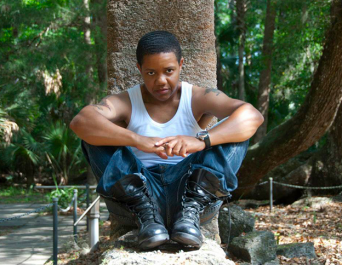 “It’s All Butch” is a striking annual calendar that showcases butch lesbians in a variety of environments. The brainchild of photographer Debbie Boud, the first installment of the calendar was released in 2010. With sparse examples of lesbians in the media and entertainment industries, Boud initially found inspiration to produce “It’s All Butch” when a friend posted pictures from cult television show “The L Word” with some comments about how hot the women were. Boud found issues with the fact that not all of these women were really gay, and her friend challenged Boud to find women that were actually “gay and hot” and document them as a photography project.

With the popularity of calendars that showcase sexy and naked gay men, calendars the feature lesbians seem to be few and far between. “I think butch women are not seen as pretty by the media and lets face it pretty sells,” Boud told The Huffington Post. “I get 20 emails a day from butch/bois that want to model but can’t find any outlet to do so.”