For the past 10 years, comedian Dana Goldberg has created a laugh track around the world and she ready to do it all again for the next decade.

Girls That Roam caught up with Dana for an up close and personal conversation about growing up funny, being a globetrotting comedian, embracing passion and yourself, giving back and smart comedy.

This funny lady has performed in the British Isle and on Olivia Cruises in addition to half the states in the U.S. She’s also shared the stage with President Barack Obama, Jane Lynch, Lady Gaga, Portia de Rossi and many other celesbians and notable people not to mention appearing on the Tonight Show with Jay Leno and many other notable TV, comedy club and festival appearances.

Belly aches for a cause

Yet, this busy comedian isn’t all about herself and hob knobbing with celebrities and presidents, Dana often takes a moment to enjoy life and help people in need enjoy life a bit more by make people laugh raising millions of dollars for HIV/AIDS, civil rights, LGBT, youth and women’s causes to name a few.

“I do I love making people laugh. For some reason it’s my, ‘I did something right today,’ kind of thing,” says Dana.

Her next road stop is in San Francisco at EDEN Friday Comedy Show with fellow globetrotting comedian Gina Yashere. The laughing ladies will entertain women and their friends for a cause from 7 – 9 p.m. on June 28 at the Brava Theater Center (2781 24th St., San Francisco, Calif. USA, 415-641-7657, Brava.org).

Their performance is one of the eight events that is a part of EDEN Pride Weekend San Francisco June 27 – 30 in San Francisco that is raising money for the new EDEN LGBTQ Youth Foundation. Party goers tickets will go directly to support LGBTQ youth in the San Francisco Bay Area with scholarships, grants and mentorships.

Dana is also excited to be back in the City by the Bay performing alongside Gina.

The two comedians performed at the inaugural EDEN Pride Weekend in 2010.

“It’s an incredible community. I can’t wait to get back to San Francisco,” says Dana, who is looking forward to performing with Gina again.

“I couldn’t be more excited about sharing the stage with Gina. She’s one of the best comedians out there today,” continues Dana, admiringly. “She’s brilliant. She’s performed all over the world. Quite the career to emulate.” 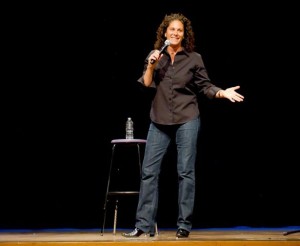 As her mother likes to tell the story, she said, “My kindergarten teacher told her I was the funniest five-year-old she ever met.”

She doesn’t know who her competition was at that time, she jokes, but growing up she was always listening to tapes of comedians Billy Crystal, Robin Williams, Steven Wright and others somewhat studying, she says.

When people asked her what she wanted to be when she grew up, she told them, “I want to be a comedian,” she says.

She followed up her kindergarten standup routine in high school at a talent show. The video tape surfaced recently and served as an interesting flashback for the comedian. In the tape she tells jokes about her ex-boyfriends, teachers and more, she says, but she’s struck mostly not only by her younger self’s talent, but her fashion choice.

“I’m wearing a pair of jeans, a button down and a tie. I look like Paula Poundstone,” says Dana laughing. “I don’t think you could look gayer unless you were wearing a softball glove and a visor. It was the funniest thing just listening to the material. I had no idea.”

In spite of early hints into the comedian’s future, Dana went to college and got her degree in physical education.

P.E. wasn’t paying the bills, so she started earning her improv chops as a bartender, lived a little until she got her story and the nerve to hit the stage in 2001.

She auditioned for a local show, Funny Lesbians for a Change, which raised money for scholarships for lesbians. She attended the benefit show for years, she says, even watched Suzanne Westenhoefer perform at the event, wishing, “God, I want to do that.”

She missed the audition call that year, but in 2002, at the age of 26, she nervously stepped up onto the stage for her seven minute set at a sold out show, hit her first big joke and was sent soaring into her decade long career as a comedian.

Seven months after that initial show she was performing nightly with veteran comedians touring Scotland for a month. The experience built her confidence and taught her how to deal with her stage fright, she says. That was 10 years ago, says the comedian, who celebrated her decade long career as a comedian at the beginning of this year.

The trail of laughter

Dana, who lives with her girlfriend in Los Angeles, is eyeing new adventures in comedy that will hopefully continue taking her around the world and out of the gay ghetto in the next decade, she says.

“I don’t want to be pigeonholed as a comedian,” she says about playing to the lesbian, gay, bisexual and transgender audience that has been her base for the last decade. “For 10 years [I] have been [playing to] 10% of the population, there is 90% of the population [that] would really enjoy and does enjoy my material when I put myself in that environment.”

She’s not going to miss the other 90% of the audiences that are out there in the world or the world in general.

Australia is calling Dana, says the comedian who runs her fingers down the list of comedy festivals around the world, Melbourne is at the top of her list followed closely by Cape Town, South Africa, but she is also looking forward to reaching out to Asia and returning to Canada, she says.

Her favorite American and Canadian cities that she’s itching to get back to are Burlington, Vt. and Chicago, Ill. as well as Ontario and Toronto, Ont. She also has her eyes on Atlanta, which she hasn’t performed in before, she says.

Television, either behind the writing desk or under the stage lights, is also an avenue she’s considering, she says. 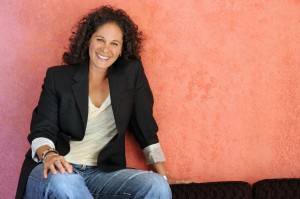 One of the things that make Dana stand out is that she doesn’t perform the same old tricks, like getting vulgar or telling “potty jokes,” she says, that many other comedians play to get a laugh.

She also doesn’t attack her audience, which makes her cringe when she witnesses other comedians do it, she says.

“I will be honest with you, when a comedian tears someone apart, it doesn’t make me laugh. It makes me super uncomfortable, like I get really bad contact embarrassment,” says Dana, who also doesn’t understand why comedians give that type of power to one audience member when there is a room full of people who also paid to see their show.

Her days bartending taught her how to disarm hecklers, she says.

Instead she aims for the intelligent wit that makes people laugh and pause to think at the same time, she says.

Paraphrasing a quote from another comedian, she says, smart comedy is, “A joke that will make you laugh for 10 seconds and make you think for five minutes.”

“When you leave my show you are going to remember some of my jokes,” continues Dana. “I think that is a really good sign of a good comedian.”

“It is my drug,” says Dana. “When I have an amazing show, it is the best way I can describe a high, because I don’t do drugs.”

“Comedy is my passion,” she continues. “I do believe that my comedy makes people feel good and joyful.”

“I love bringing joy to other people’s lives. I know that if you come to my show … you are going to feel better when you leave than you did when you come in.”