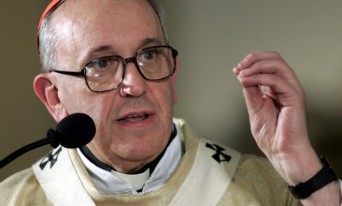 Praise has abounded for the new tone Pope Francis set for the Catholic Church in his extensive interviewpublished last week, but in terms of his actions, it doesn’t look like a lot has changed so far. In particular, one Australian priest has been bothdefrocked and excommunicated by the Vatican apparently for his support of LGBT equality and women priests. Father Greg Reynolds was not provided an explanation for being cut out of the Church.

It’s telling that he refuses to answer the question of whether he approves of homosexuality, because there is no reason to believe that he does. It was only three years ago that he was describing marriage equality as “a scheme to destroy God’s plan,” suggesting that allowing same-sex couples to adopt is a form of discrimination against children. He may not care if priests are gay, but he certainly cares if they abide the anti-gay teachings of the Church. Indeed, Francis’ tact seems to be focusing on the issues more than the people, but this is a distinction without a difference; while his renewed emphasis on issues like poverty is laudable, discrimination against LGBT people isn’t any more tolerable just because it’s framed differently.