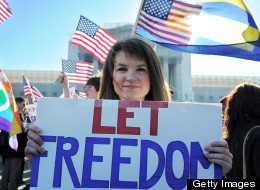 After the US Supreme Court ruled DOMA unconstitutional, many human rights groups have commented that other LGBT issues have failed to gain steam. Advocates for the transgender community and HIV/AIDS awareness groups are finding it harder to receive well-deserved attention from media outlets. LGBTQ issues like immigration reform and the Employment Non-Discrimination Act need attention.

Terry Stone, a spokesperson for CenterLink, a coalition of 200 community centers that serves to help the LGBT community, weighed in on the growing concern. “I wish we were spending a little more time working on these other issues and not just making marriage the centrepiece.” “It doesn’t help you so much if you can get married and then get fired because of that,” Lambda Legal’s legal director, Jon Davidson, said in a press release.

Read more at dot429.com
Weigh in! What LGBTQ issues do you think need more attention? Talk about it on our boards.