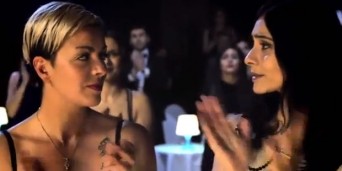 On Valentine’s Day, Iranian pop star Googoosh released a special video for her new song “Behesht”—translated as “Eden” or “Heaven”—which depicts the relationship of a fictional lesbian couple. Being such an influential figure and the first to speak out publicly in Iran in support of LGBT citizens, her video has sparked considerable outcry and backlash.

The video begins with Googoosh performing to a crowd of couples before we see a girl through the eyes of her partner. The video then takes us through the various important moments in their lives from their engagement, to meeting the parents, to being physically accosted by a group of men on a subway. Throughout the video, the fact that the couple consists of two women is not revealed until the final minute of the song, when we return to Googoosh’s performance to couples. One of the couples in the room is the woman and her fiancée.