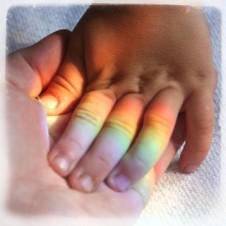 The Iowa Supreme Court has ruled that when a woman in a same-sex marriage gives birth to a child, her spouse should be listed as the other parent. The case involved Heather Martin Gartner, who gave birth to her daughter Mackenzie in 2009, but was told her wife Melissa would have to go through the costly process of adoption to be recognized as Mackenzie’s other parent.

At issue is that the language in Iowa’s laws about presumption of parentage are gendered (husband, father, paternity). However, the Court pointed out that the law does assume that the husband of a mother is the father — in fact, if a woman in an opposite-sex marriage were to use an anonymous sperm donor, the state would not even know when it determines her husband to be the father. Thus, the same standard should apply to lesbian couples under the Iowa Constitution’s guarantee of equal protection — the same guarantee the Court used to rule for marriage equality in 2009.