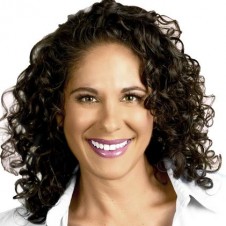 
Comedian Dana Goldberg is set to headline at Seattle Women’s Pride this June. Goldberg is a highly acclaimed comedian, who has shared the a stage with President Barack Obama, Portia DeGeneres, Lady Gaga, Jane Lynch, Kathy Griffin and many more. She has also been named one of CURVE Magazine’s top five funniest lesbian comedians in America. In addition to being incredibly funny, Goldberg also gives back to the community- frequently performing at fundraisers for HIV/AIDS and LGBT awareness.

We sat down with Goldberg to discuss her upcoming performance at Seattle Women’s Pride, what to do when you run into an ex at Pride and her best Pride memory.

How do comedians celebrate pride?

Well, I can’t speak for all of us, but I day drink and make poor life choices.  Kidding…sorta. Usually we’re on stage entertaining the masses with a lot of drunk screaming sunburned proud gays in the audience. I actually really enjoy going to the parades and having an adult beverage or two with some friends. I don’t work a lot of the pride festivals so I’m excited to headline Seattle Women’s Pride this year.

How did you get involved with Seattle Women’s Pride?

Over the years I’ve been lucky enough to build a relationship with Sarah Toce, the creator and producer of the event. I’ve been performing once a year in Seattle at Theater Off Jackson to an awesome sold out crowd, so I’m excited to bring my long show to the pride stage for the ladies. It’s going to be a fantastic weekend.

If you’re at Seattle Women’s Pride and you see your ex-girlfriend. What should you do?

Assuming you aren’t actually there with her? You know we’re all friends six months later. If it was a good break up, say hi, visit, you might even make out after a couple of dances and some vodka. If it was a bad breakup, just turn around and walk the other direction. No one needs that kinda drama at pride. Be smart ladies *cue shooting star* The more you know.

What advice would you give to people looking to hook up at Pride?

Make sure the girl is single! Other than that, just be careful of still photography. That shit will end up on Facebook before the night is over.

Tell me your favorite Pride memory.

I had the pleasure of marching in San Francisco’s Pride parade a couple of years ago and there was a sweet male couple in front of me holding hands with a sign that read “47 years together…and finally legally married.” It really puts things into perspective what the LGBT community has accomplished over the years, and now Pride is more of a reason to celebrate those accomplishments…while day drinking! Unfortunately, that couple is never the one who is featured on the front page of the newspaper the next day. It’s always someone in ass chaps with no pants wearing a rainbow boa in 6 inch heels and I’m like, “Is that my English professor?!”

Want to see Dana perform at Seattle Women’s Pride? Tickets are available via Stranger Tickets at $30 General Admission and $45 VIP. The VIP Experience gets guests closer to the action with Priority Entrance, a Meet-and-Greet with Dana after the show, Swag Bags, and more. Visit seattlewomenspride or strangertickets.com/events/31940901/comedian-dana-goldberg-at-seattle-womens-pride for more information.