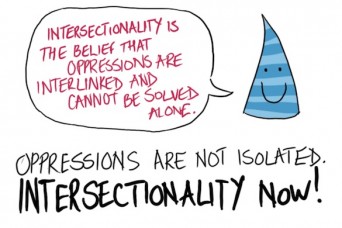 A lot of strides have been made in the acceptance of minority identities in the past few years.

Awareness and understanding of homophobia, mental health discrimination, race politics and sexism are all on the rise and the average person is, I would argue, more informed than ever before. We still have a long way to go if we’re ever to reach this liberal utopia us hipsters dream of (free quinoa for all!) but we’re slowly getting there and that’s great.

Many of us now have a clear picture of the forms of oppression that exist in the world and of our own set of privileges or lack thereof. The next step in educating the public, now that they’re relatively cool with someone being gay, black, bipolar or muslim, is getting them to accept and understand what it means to be gay, black, bipolar and muslim. I am talking, of course, about intersectionality.

Intersectionality is the study of intersections between different systems of oppression, particularly those impacting women. How the different facets of a person’s identity overlap and interplay is important both to how they see themselves and how they are seen by others.

To illustrate why intersectionality — particularly intersectional feminism — is so important, allow me to use an example from popular culture. Sophia Burset in “Orange Is The New Black” is a transwoman of color with a criminal record. If she were to be released from prison, the way she was perceived and treated by people around her would likely be influenced by all of these factors, not just one of them. If she were to be sexually harassed by a new employer, and complained about this to a white feminist, she might not fully understand the seriousness of Sophia’s situation, because of her own privilege. If Sophia tried to report this harassment to the police, racism or transphobia might factor in to how her complaint was received and what was done to help. Because Sophia is an ex-con, she might not feel safe reporting the employer in the first place.

When the intersections of a person’s identities are hidden, we might ask how we are supposed to be mindful of them. I believe the key here is to listen, to be open to new information. This is not to say that we should give people unlimited leeway and stop noticing and calling out privilege when we see it. Only that in doing this we should be open to learning that it is not as simple as we thought. People are not one dimensional.