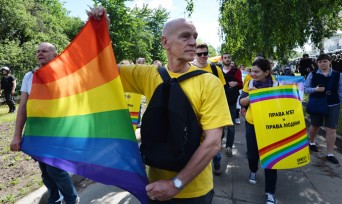 A number of demonstrations across the globe this weekend led to violence perpetrated by those opposed to LGBT equality.

In Ukraine, about 100 gay rights activists held the country’s first ever pride rally in Kiev, even though a court had canceled it for security concerns. Police nonetheless protected the small rally, arresting 13 Orthodox Christians who tried to break up the march. One activist broke through the cordon and tried to slap down the gay rights banners, but was quickly seized by police. Though not a very large display, it was still a milestone for LGBT people in Ukraine, where lawmakers have tried to ban “pro-gay propaganda.”

Police did less to protect LGBT activists who marched in Moscow despite being denied a permit to do so. Over 30 activists were arrested, and police did little to protect them from the violence of Orthodox Christian counter-protesters, even when they were in custody. The above photo shows activist Nikolai Alekseev being punched in the face while already under arrest — he was unable to defend himself and police did not intervene. More photos of the demonstrations, violence, and arrests can be found at Metro News Russia and Sky News.