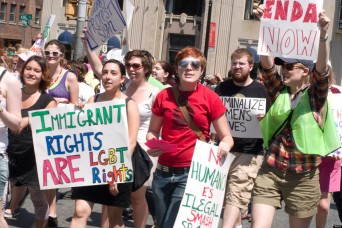 At first glance, you might not think there’s a lot of commonality between the fight for immigration reform and the fight for gay rights, and a lot of people, including some advocates in both communities, might agree with you. However, with almost one million immigrants in the U.S. identifying as LGBQT, it’s clear that there’s a lot of overlap here. Some of us, in other words, live at the intersections.

Of that one million, an estimated 267,00 undocumented immigrants are LGBQT. Among them, the fight for immigration reform has been paired with a fight for their rights to live safely with their chosen families, their loved ones and their communities. And some of them have risen up, identifying themselves as “undocuqueer.”