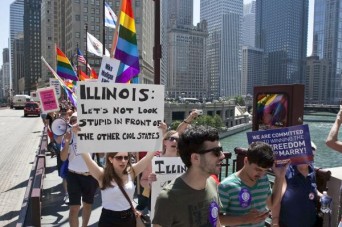 The Illinois House cleared the last major hurdle for enacting marriage equality in the state on Tuesday by approving a same-sex marriage bill, putting the state on track to become the 15th in the country with marriage equality. House lawmakers approved the bill following two-and-a-half hours of debate during a veto session of the legislature by a 61-54 vote. On the House floor, numerous lawmakers spoke out in favor of legislation, including State Rep. Kelly Cassidy, a lesbian. Cassidy said is personally important to her because it would send a message to her family and other families like her in the state that “it does get better.”

House approval of the bill virtually assures it becomes law because passage in that chamber was the most challenging hurdle for the legislation. Advocates have expressed confidence that the amended legislation will pass in the Senate, where similar legislation had already passed before. Illinois Gov. Pat Quinn has been a strong champion of the bill and is expected to sign it.