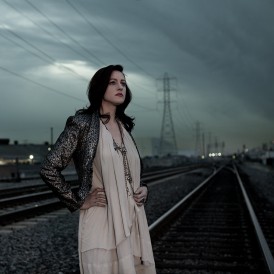 It’s been an incredible year for IAMEVE. The singer-songwriter was featured in the “Advocate”‘s Reasons for Pride 2013, played her music in the Pride Parade in NYC and today she debuts her latest song “Red and Black, from her upcoming fairytale-like album “The Everything Nothing”–debuting in August. But her fairytale doesn’t end there. Her sensual, haunting vocals are also being featured in the upcoming film “Percy Jackson: Sea of Monsters.”

Where did you get the inspiration for this track?
The inspiration for “Red and Black” came from a wild dream I had with fire, snakes and drums. I kept hearing the chorus chant over and over again and became obsessed with turning it into a song. Later I found out it was connected to an old folk rhyme to tell venomous and non-venomous snakes apart, which was so in sync with the story. In the previous sequences, Eve had let go of anything “poisonous” to her soul. “Red and Black” is essentially a song to keep out the dark and call in the love.