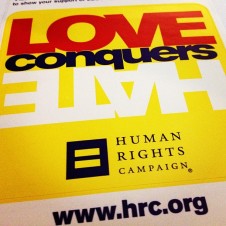 #LoveConquersHate, a social media campaign launched by the Human Rights Campaign on November 4, supports Russia’s LGBT community by spreading awareness about the oppressive anti-propaganda law that is being used in the state to silence queer people.

Celebrities such as Jonah Hill, Fergie, Jamie Lee Curtis, and Ricky Martin can be seen sporting the HRC’s iconic “Love Conquers Hate” shirt, issued in Russian, on the campaign’s website, Love Conquers Hate. Participants are invited to share pictures of themselves wearing the new t-shirt on social media platforms with the hashtag #LoveConquersHate. The pictures will be added to the site’s gallery, in an effort to show how many people condemn the Russian anti-gay legislation.