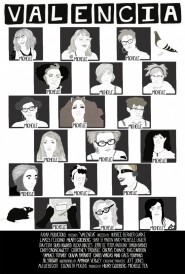 Michelle Tea’s queer classic “Valencia” came to to Frameline (San Francisco’s annual LGBT film festival) last Friday with one movie that is many: an adaptation of her seminal memoir “Valencia” by not one, not two, but 20 different prominent queer directors. “Valencia” the movie consists of 18 short films based on individual chapters from the book, all edited together into a feature. How do 20 people collaborate on the same movie? To find out, we asked all of them.

Every chapter of the film has its own Michelle Tea. Why did you cast who you did?

Aubree Bernier-Clarke: Shawna Elizabeth is a friend who just has a Michelle vibe. During auditions nobody seemed right for it, and then I had a dream that Shawna was going to play Michelle. As soon as I woke up I sent a text offering her the part.

Lares Feliciano: I was in Annie Danger’s Mission apartment getting tattooed when I realized she would be perfect. She might still have had the needle in my arm when I offered her the part.