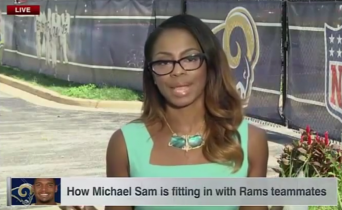 When asked by an ESPN anchor how Sam was fitting in with the Rams, rather than discuss the rookie hopeful’s on-field performance (he did have two sacks against Cleveland this past weekend) or pranks to which first-year players are typically subjected, Anderson proceeded to ramble on about how Sam appears to be delaying his post-practice showers in deference to his teammates.

Anderson’s report began innocently enough, quoting one Rams’ player as saying that Sam was “just one of the guys.” (So far, so good; right?). Things devolved quickly, though, as she went on to quote another Ram as saying that Sam appeared to be “respecting our space” and “is waiting to kind of take a shower” so as not to make his teammates feel uncomfortable. Even putting aside the super unclear “kind of take a shower” phrase (is that like “kind of pregnant”?), this was about the time one started to get the ominous feeling that Anderson wasn’t exactly headed toward Peabody Award territory with her story.

The ESPN anchor back in the studio was either as oblivious as Anderson, stunned by what he was hearing or teetering on the edge of his seat waiting for salacious details regarding hunky athletes in the shower, because he allowed Anderson to continue the demonstration of her journalistic prowess, such that it was.

She went on to share that other Rams players “didn’t know that specifically” because they “weren’t tracking that,” “that,” of course, being when and with whom Sam is showering. (C’mon, guys! How are you gonna whittle the roster down to 53 players if you’re not “tracking that”? Football is a game of statistics! Sure, sacks and tackles are important, but hygiene counts, too, yo. By the way, guys, you may want to check with Sam’s boyfriend; he may have some historical data to fill in the gaps for you on that.)

Anderson continued down the slippery slope (after all, that’s whatcha get when ya drop the soap in the shower), revealing that Kendall Langford (one of the quoted Rams’ players) hadn’t been in the shower at the same time as Sam, though there could be “a million reasons for that” — Sam could be doing extra work on the practice field; he could be riding his bike; or he could be doing extra cardio. (It was unclear at this point if  Anderson was using the phrase “extra cardio” as a euphemism of some sort.)

Near the end of the report, Anderson seemed to remember that she was a professional sports correspondent on live television (perhaps a producer broke out a taser?) as she managed to work in some actual football-related information about Sam, again quoting Langford as saying, “If he doesn’t make our team, I’m pretty sure somebody will definitely pick him up on another team … he’s shown some flashes.”

Blessedly, Anderson didn’t speculate about the nature of the “flashes” and whether or not they took place on the playing field or in the shower, but the damage was done and the story soon exploded on social media. Perhaps Rams’ defensive end Chris Long best summed up the collective opinion about the ESPN report when he tweeted, “Dear ESPN, Everyone but you is over it.”

Alas, ESPN, it’s sad but true that in that moment you became to the St. Louis Rams’ locker room shower dynamics what CNN was to the disappearance of Malyasia Airlines Flight 370. Enough already; Michael Sam is a gay man who takes showers and the plane is still missing. We get it!

Unsurprisingly, and to their credit, given the backlash, ESPN apologized for the report issuing a statement on Wednesday which read: “ESPN regrets the manner in which we presented our report. Clearly yesterday we collectively failed to meet the standards we have set in reporting on LGBT-related topics in sports.”

Really, ESPN? A report based on outdated stereotypes and which proliferated anti-gay paranoia failed to meet your standards regarding LGBT-related topics in sports? Way to set that bar high!

As offensive as it may be, all the hoopla about with whom Michael Sam is or isn’t showering did serve one positive purpose. It made me very happy that I’m a lesbian rather than a gay man. Because despite the relatively recent coming out stories in women’s sports, not once have I heard speculation about Britney Griner’s or Abby Wambach’s shower schedules or conjecture regarding the timing thereof. Nor have I heard pre-draft commentators ponder how an openly lesbian athlete would be received by her teammates in the locker room. And I don’t recall Twitter exploding with hate at any point when two women kissed on live television during a celebratory moment.

They say it’s good to be a girl and that seems to be very true when it comes to gays and lesbians in sports, not that lesbian athletes haven’t faced their share of discrimination or persecution. But we women-loving-women seem to have a leg up in these matters as while the general public — and specifically the largely male-dominated sports-loving public —  seems to find the idea of a gay man in the locker room shower distasteful or dangerous in some way, the idea of a shower full of lesbians is every guy’s fantasy. There’s a down side to that, of course — I could dedicate countless columns to the objectification of women and the male lesbian fantasy vs. lesbian reality — but all things being equal I’ll take being idealized and fantasized about over being demonized any day.

Watch the controversial ESPN report below.