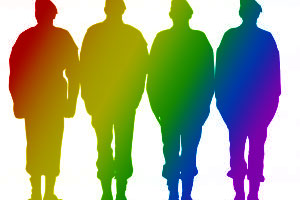 Young, ambitious LGBT recruits usually don’t think ahead about starting families, but five or six years down the line, when they meet the right person, they end up having to choose between careers and a future home life, and very often it’s the service that loses out. When they walk away from the military they take years of expensive training and valuable expertise with them. “Housing, feeding, schooling, the teaching and instruction and training hours; the training pipeline can take years,” Terra Lathrop, who was once in the midst of what could have been an ideal military career, says. “All of that is not something you can just pass on to the next person in line.”

The US military exists as a volunteer-only service, constantly on call in an age of seemingly ubiquitous global conflict. The necessity to recruit and retain volunteers and to maintain readiness in and out of combat zones has never been more salient. At this critical time, the Defense of Marriage Act pits LGBT soldiers’ family interests and sense of duty against one another; they can fully commit to one or the other, but under the law, never to both. There are no winners in such an impossible conflict, but there are clear losers: The Army, the Navy, the Air Force, the Marine Corps and the United States.