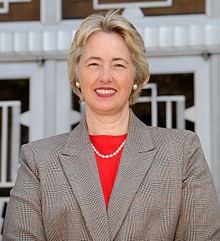 At the Democratic National Convention in Charlotte last Thursday, openly lesbian Houston Mayor Annise Parker discussed President Obama’s unexpected evolution on marriage equality, noting that she “got some flack” for stating in an interview earlier in the year that the President “needed to evolve,” a process which she said has now moved civil rights groups to support full LGBT equality.

Parker also weighed in on the role of the gay GOP group Log Cabin Republicans, a topic about which Congressman Barney Frank stirred controversy a day earlier at the convention when he said the group’s role model is “Uncle Tom,” invoking an angry counterattack from the group, which in return prompted a strong response by the gay Democratic group, National Stonewall Democrats, defending Frank. Parker at first quipped, “Who?” when asked about the group before more seriously noting that it is important to “stay engaged” in both parties but not at the expense of “self-respect and dignity,’ which she called, “frankly, self-hating.”