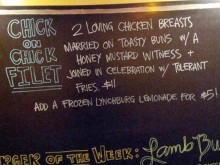 Beaver’s, a Houston restaurant that serves up Texas coastal cuisine, has decided to respond to Chick-fil-A’s anti-gay stance the only way it knows how — with food.

Beaver’s announced a new addition to its menu, the “Chick-On-Chick” Filet, which is described as “two loving chicken breasts married on toasty buns with a honey mustard witness and joined in celebration with tolerant fries.” A photo of the menu special has since been circulating on Facebook.