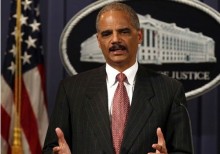 U.S. Attorney General Eric Holder called on LGBT lawyers Thursday night to draw on their “considerable passion and expertise” to build on the progress the Obama administration has already made on advancing LGBT rights.

During his keynote speech at the LGBT Bar Association’s annual Lavender Law Conference, Holder said those in attendance are or will be “uniquely situated to use the power of the law” to create a more equal society.

“And you have not only the power, but — I believe — the solemn responsibility, to do precisely that: to safeguard the rights and freedoms of everyone in this country, and to carry on the critical but unfinished work that lies ahead,” Holder said.