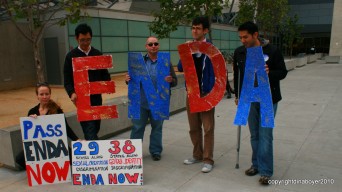 A Senate committee made history on Wednesday by approving for the first time a trans-inclusive version of the Employment Non-Discrimination Act and picking up key Republican support from Sens. Orrin Hatch (R-Utah) and Lisa Murkowski (R-Alaska).

Lawmakers on the Senate Health, Education, Labor & Pensions Committee reported out ENDA by a 15-7 vote after a short period of discussion. No amendments were offered except for a manager’s amendment, although Sen. Lamar Alexander (R-Tenn.) said he’ll reserve three that he planned for consideration on the Senate floor.

Senate HELP Committee Chair Tom Harkin (D-Iowa) noted the historic nature of the committee’s action prior to the vote and said it’s “time, long past time” for Congress to take action against LGBT workplace discrimination.