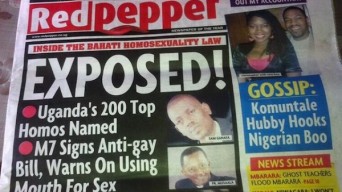 In the wake of Uganda making law its “Jail the Gays” legislation, it’d be easy to be alarmist about the situation. That said, there really is reason to believe that Uganda’s attack on the LGBT rights is turning deadly. Just hours after President Yoweri Museveni signed Uganda’s Jail the Gays bill into law, Ugandan tabloid the Red Pepper published a front page completed by the headline:

This headline appeared alongside head shots of some of the “homos” the paper aimed to out, including two well known LGBT rights activists.  Reports say that since Museveni signed the bill into law, there have been at least two confirmed arrests, with several more remaining unconfirmed but highly likely. In tragic addition to that, there are stories that people have in fact taken their own lives rather than risk being mercilessly oppressed under Uganda’s new anti-gay law.