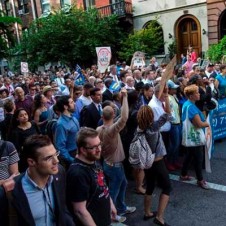 Serena Poon and Melissa Cerezo marched along shouting “Love Conquers Hate.” The two women got married in Brooklyn on the same day Carson was killed. “We want the streets to be safe for our kids,” Poon said. After the rally, Sharon Stapel, the leader of the LGBT advocacy group the Anti-Violence Project, said she was gratified by the turnout at the rally, but that the work is far from over. “I hope that this is actually the beginning of a community-wide call to action where people actually come together and work to create the safety that we’ve been talking about today.”