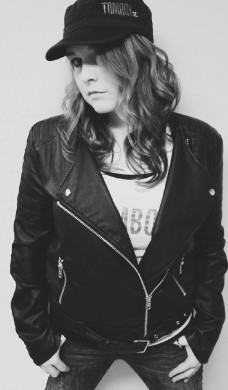 Label eschewing singer-Songwriter Hannah Thomas has been called country, punk, rock, Americana and more. She’s a genre-jumping outlaw, so it is no surprise that Thomas has enlisted power pop producer extraordinaire Don Dixon (R.E.M., the Smithereens, Marti Jones) to work on her next release.

Once again, Hannah will be playing across genres with songs ranging from classic country with a twist like fan favorites “(God Help My Mama), I Turned Out Like My Dad” and “The Truth About Outlaws,” rocking licks like “Lie to Me” and “Ain’t Got Nothing to Do with Love’ and even an updated version of the Classic IV and Atlanta Rhythm Section hit “Spooky.”

In order to raise the loot to record the eight-song CD in four days, Hannah is launching a Kickstarter campaign. Supporters get all kinds of goodies, like a pre-order of the CD, house concert or a day in the studio.

Check out Hannah’s Kickstarter heist, which runs through April 24, 2014. Yeehaw. You can’t keep a good outlaw down.

One Response to “Yeehaw, Hannah Thomas stages Kickstarter hold up to fund ‘The Truth about an Outlaw’ EP”