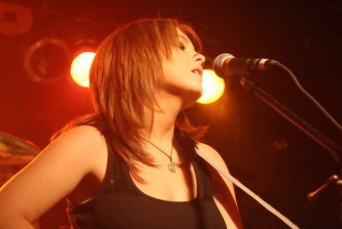 Hannah Thomas, the queer, rockin’ country singer-songwriter is on the rise. Having shared the stage with stars like Amy Ray and Jen Foster, Hannah’s energetic presence and bluesy songwriting has her new EP, “Goodbye on Wasted Time,” getting rave reviews. She caught up with Lesbian.com’s Dana Brenklin to talk about her new tunes, a big tour and coming out in the country music scene.

Your new EP “Goodbye on Wasted Time” is great. How would you say it differs from your previous work?

It comes from a more honest place. When I stopped worrying about how to market the music, and started making music that I would like to listen to myself everything changed. Writing without a filter gave me a much broader canvas that allowed me to really open up as a songwriter. I feel like I found my voice.

You’ve got quite a few tour dates lined up. Is there any show you’re particularly excited about?

I am excited about all the shows, but September has some really great things happening for me. I will be opening a couple of shows for the , Girls in the Midwest, as well as playing at Sweet’s Playa Del Carmen resort (which will be my first international show)!

In January of this year you came out in an interview with the GA Voice. Has your audience changed in the way they receive you since then?

I think people can tell when you’re not being with honest with them, Since I came out I feel like my audience has embraced me more and is more loyal than ever.

Was your coming out a spur of the moment thing or was it something you planned?

My songs were already headed in a direction where I think people had an idea, but it was still very difficult to make the decision. I thought about it for a long time, but when the CD was about to be released, I figured it was time. It was one of the more freeing moments of my life.

In your opinion, what are some of the pros & cons to coming out in this business, particularly as someone whose music falls under the broad “country” umbrella?

I am very thankful for those that paved the way like kd lang and Cheley Wright, and even though I think there is still a stigma, especially within the country world, the world is changing every day. While I have to consider the business side of things, I try to never let it limit who I am as artist.

Often, public figures/celebrities who come out say they were told it was a “bad idea” to come out. What would you say to that attitude?

All the success in the world doesn’t matter if you are happy.

And what would you say to an artist struggling with whether to come out or not?

You know when it is the right time to come out. You should never let anyone pressure you to stay in the closet or come out. It’s completely your decision.

Has allowing your audience to know the real you changed your life or career, so far?

I have a more loyal following with my core group of supporters. I think they would come see me every night if I played the same place! I could have never imagined how great it has been and I am thankful everyday for that.

What would you call the biggest moment of your career so far?

When I think I have reached my biggest moment it just keeps getting better. In the past couple of years I have played in front of large audiences, had Amy Ray come sing on my CD, she then asked me to come sing on her solo CD and in September I will be opening for Indigo Girls (who have been some of the biggest influences on my career), I hope if you ask me again in six months I can add more to the list, but I have to say I am pretty happy about all of it.

Thanks for your time, Hannah. So tell us, what do we have to look forward to from you? What’s next?

WI am working on a video soon and have enough songs for a new CD, which I can hopefully get out sometime next year. And hopefully I will keep adding new places to the tour schedule!