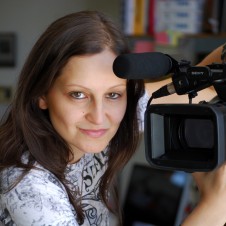 Award-winning out filmmaker Rolla Selbak is releasing a new online “interview” series called “Grrl’s Guide To Filmmaking,” in which she shares her personal Hollywood vlogs as she visits some of the freshest female filmmakers making it happen today.

“Grrl’s Guide To Filmmaking” offers an exclusive glimpse behind the scenes, showing the magic, behind the magic.

Selbak sneaks us into the Paramount writers room with Faith Soloway, writer on the breakthrough Amazon series “Transparent;” stumbles into Cathy DeBuono’s backyard; gets the juicy details from Guinevere Turner and how she came up with the title “The L Word” and much more.

The first episode featuring an up close and personal interview with Faith Soloway can be seen now at Tello Films.

Selbak is an award winning filmmaker who is part of the San Francisco Women’s Film Institute Leadership council, and is responsible for creating and producing the San Francisco International Women’s Online Film Festival.

She’s queer, an Arab-American and a woman.

But that hasn’t stopped the self-taught auteur from writing, directing and producing films that matter to her.

We all know her as the mastermind behind the web series sensation “Kiss Her I’m Famous,” starring Tracy Ryerson and Ilea Matthews, which satirizes the booming business of the sex tape madness and how celebrity wannabes use their home movies as a ticket to greater stardom and a major payday. But Selbak carries a filmmaking dossier that may very well rival some of the most prominent out female filmmakers in the industry.

Selbak’s impressive credits include writing and directing the internationally acclaimed feature film “Three Veils,” starring Sheetal Sheth (“Looking for Comedy in a Muslim World,” “I Can’t Think Straight”), Mercedes Masohn (“666 Park Ave”) and featuring Eric Avari (“Heroes,” “The Mummy”). The film confronts delicate subject matters such as arranged marriage, homosexuality and love within the Muslim-American subculture, and portrays the leading female characters as human beings first, women second and their cultural surroundings as veils that dictate how much of their inner-selves are revealed.

With “Three Veils,” Rolla Selbak, who grew up in the Middle East and chafed under the strict social structure of a Muslim family, delivered a snapshot of her feelings about how women’s rights are trampled under in her otherwise rich and vibrant culture. The feature film won Best Screenplay at San Diego LGBT International 2012; Best LGBT Film at the New York City International Film Festival 2011; Jury Award Best Film at San Francisco Women’s International 2011; Jury Award Best Female Feature at the Long Island LGBT Film Fest 2011; and the Rainbow Award at the Honolulu LGBT Film Fest 2011, among others.

Her previous feature, “Making Maya,” has found a successful niche within the independent film world, and has been screened at film festivals and universities nationwide. She was announced a winner of the LinkTV’s One Nation Many Voices film competition in 2008 for her documentary “Green Blue Sea,” profiling a young, Palestinian scuba diver and his profound respect for the ocean.

She is known to delve into subject matters that bear distinctively bold, thought-provoking and compelling qualities. It’s no surprise that this established filmmaker and Palestine native has been invited to speak at multiple panels on independent filmmaking and women in the arts, and was a grant panelist for the 2008 Regional Arts & Culture Council of Oregon.

Her other notable achievements include scoring and writing music for her films, and being a recipient of the inaugural Women’s Vision Film grant for her screenwriting, awarded by the Faerie Godmother Fund.