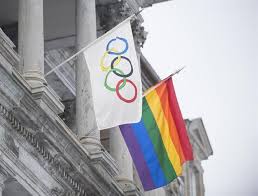 A rainbow flag flying over city hall alongside the Olympic flag in Montreal, Canada during the Sochi Olympics. (Photo: The Canadian Press/Graham Hughes)

The Gay and Lesbian International Sport Association (GLISA) today greets reports from Reuters that the International Olympic Committee may force future bidders to abide by a specific anti-discrimination rule modeled on the Olympic Charter’s Principle 6.

“The International Olympic Committee has until now refused to get involved and condemn homophobia and transphobia in the host country for the 2014 Winter Olympics, Russia,” said Marie Houzeau of the GLISA Executive Committee.

GLISA seeks the addition of Sexual Orientation and Gender Identity to the Olympic Charter. GLISA further urges the IOC to never again award the Olympic Games to a country which does not respect the charter. “Russia has proven to be too controversial a host nation for the Olympic ideal,” said Houzeau.