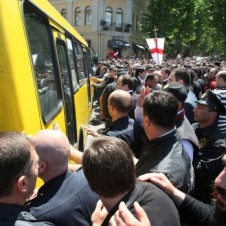 Despite Georgian prime minister Bidzina Ivanishvili’s assurances that citizens would be protected at a pro-LGBT rally in Tbilisi, gay rights activists were forced to flee after thousands broke through police barricades on Friday.

Holding banners that said “Stop Homosexual Propaganda in Georgia!” and “Not in our city!” demonstrators overwhelmed the group of 50 pro-gay attendees rallying to raise awareness on the official international day against homophobia. Police were forced to escort the gay rights demonstrators onto buses, driving them away from the violence.