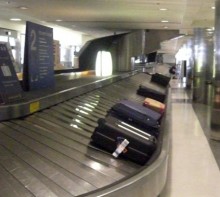 Picture the scene in Norfolk. In order to retrieve the bag from the carousel, the men had to reveal something normally kept within the privacy of a relationship. They were mortified.