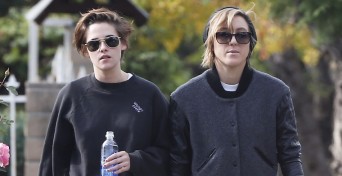 If you have been on the internet in the past week, you have probably come across pictures of “Twilight” Star Kristen Stewart with Alicia Cargile. The two women are probably in a relationship, but the internet is referring to the two as “gal pals” incessantly. “Gal Pals” as a phrase invokes the image of two wholesome young ladies from the 1950s on their way to a dance to meet some men. It’s heterocentric and desexualizing. It’s reminiscent of the popular memes, “Some eCards” that circulate on Facebook all the time, depicting people from a gentler time but with satiric modern captions stuck over them. Only there is no irony to be found in “gal pals.”

Like a record stuck on repeat, like there is no thesaurus that can give these entertainment writers another term that they can use for a situation between two women who live together and go on nice vacations and snuggle and basically do everything together. Oh and Kristen has been wearing a ring on her left ring finger. But Cargile is still her “gal pal.” The exception to this is OK! Magazine, who has called Stewart a “lesbian.”

I know, there are going to be reactions to this article saying, “Who cares about Kristen Stewart?” What I’m trying to say is that this goes beyond Kristen Stewart’s sexuality. This is about the erasure of queer women from media when they don’t fit into the standard narrative.

There is a dichotomy at work here. Lesbianism isn’t completely absent from the entertainment landscape. Tabloids love to insinuate that certain kinds of women are dating. When singer Taylor Swift was photographed leaning into model Karlie Kloss, the internet exploded with “Is she a lesbian?” posts. Those posts seemed disingenuous. Swift and Kloss were at a crowded club, Swift was probably leaning in to yell something into Kloss’s ear and that was that. However, it was more titillating to pretend that those two white, feminine, thin, young women were going to have hot girl-on-girl sex. The entertainment industry is fine with promoting a lesbian fantasy, but not a lesbian relationship.

If a straight actress goes to lunch with a male costar, that’s all the internet needs to decide they are in a relationship. “Mad Men” stars Jon Hamm and Elizabeth Moss have been accused of being a secret couple behind his girlfriend’s back. “Hunger Games” stars Jennifer Lawrence and Liam Helmsworth have too, despite Lawrence’s very public relationship with Coldplay frontman Chris Martin. You could substitute countless examples here. However, when Ireland Baldwin started dating Angel Haze, the media referred to them repeatedly as “gal pals” even when they were posting kissing selfies on Instagram. Finally, Haze got sick of being called “best friends” and clarified, “We fuck and friends don’t fuck” [via]

From my perspective, “Gal Pals” boils down to two issues. The media thinks that there is no money to be made from loving lesbian relationships that don’t invite the male gaze. However, this can be easily disproved. Ellen and Portia DeGeneres are loved pretty much universally by America. Divorce and pregnancy rumors have made the rounds in the tabloids because they sell. People care about these women even though they are lesbians. There is room for more than just one power lesbian couple.

The other issue is that most entertainment writers don’t know how to write about the nuances of queer female sexuality. You either have a “gal pal” or you are a lesbian. As Shane wisely said on “The L Word,” “sexuality is fluid.” Yes, Kristen Stewart might consider herself a lesbian now. But she might be bisexual, or pansexual or queer, or maybe she labels in a completely different way. Disney star Raven Symoné has been in a lesbian relationship for years, and eschews labels, but has said that she is attracted to both men and women. It is hard to write about female sexuality given the plethora of options and the fact that the subject might not label or might not fully know her orientation yet. But the media owes it to us to try and get it right. Or, to at least not “gal pal” queer women out of the conversation.

Natasia Langfelder is just a girl, writing about girls in New York City. Read more of her work at Hot Femme in the City.