My grandfather was born near Kiev, Ukraine when Russian pogroms decimated Jewish villages. Fearful for their lives, many countrymen immigrated to the United States. Over the next 100+ years, Russia fought in both civil and world wars interspersed with times of peace, albeit under repressive rule, rationing and other less-than-desirable conditions.

The end result was the tearing down of the Berlin Wall and the breakup of the USSR. Now, with the Ukraine no longer a part of Russia, the fighting continues. Why are they fighting? For the same reason many wars are still being fought: freedom to live the life of one’s choice. In a recent policy decision that catered to part of their citizenry, the Ukrainian government rebuffed the European Union in favor of mother Russia. In so doing and despite having achieved a measure of autonomy, the Ukraine threatens to tip the balance of their hard won freedom back toward Soviet influence, the same Soviets who criminalized the birthright of its LGBT citizens. 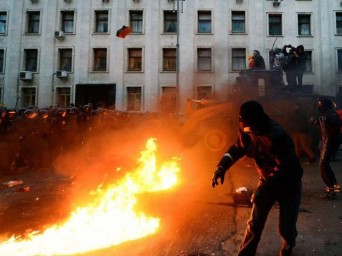 Relatively speaking, Ukraine’s separation is recent history and living in a more Westernized society must seem tenuous. Thousands have taken to the streets in a show of strength and determination. Their message is simple: they want to be allied with progressive European interests. They want to enjoy a free life, whereas an alliance with Russia is a step backwards. This is unacceptable, yet so important that people are protesting. At first it was peaceful but now they are dying for their cause.

As I write this, the Sochi Olympics are winding down. Months before the games began, in typical showy fashion, President Putin chose to enact punishing laws aimed at their LGBT citizens. Bloody clashes made the news. In response, communities around the world loudly proclaimed their support of LGBT rights and gay Olympians, and decried the new laws. There was no shortage of publicity. I cannot know if this was part of Putin’s agenda as he reveled in his shirtless, misguided macho glory with his country in the world’s spotlight. He gave assurances that security would be in place to protect all visitors, though there were a few reports of conflicts. What happens after closing ceremonies is anyone’s guess.

While we watched the Olympic Games in Sochi, we were mindful of our LGBT brothers and sisters, knowing an incident could occur where innocent individuals might be harmed. And during that time, we also watched Kiev’s Independence Square turn into a blackened battleground. The stakes skyrocketed when rubber bullets were replaced with real ones. Riots are not a game. There is no medal for how far you can throw a Molotov cocktail or how fast you can run from a baton-wielding policeman.

I am an American, but I feel these people are my countrymen. I shudder to think what my life would be like if instead of watching the Olympic Games in safety and comfort, I was in the thick of it defending my independence while trying not to get my head cracked open. Surely, LGBT Ukrainians, their allies, and indeed, all Ukrainians, wish to live peaceful, open lives without fear of arrest or violence. Sadly, the Russian LGBT community protests under this threat. We must continue to fight for them, too. We are all countrymen.

Zoe Amos brings her lesbian point of view to articles and stories on diverse topics. Connect with her on Facebook and Twitter. “Superior” a novella, is now available on Amazon. Read her short stories on Kindle and Nook. Check out her other life at: www.janetfwilliams.com.