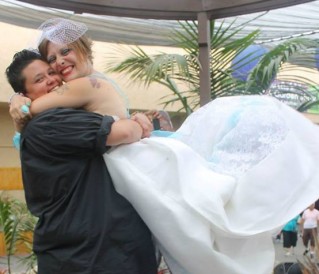 It’s not a stretch to say the vast majority in the LGBT community in California were absolutely thrilled when the Supreme Court struck down DOMA and threw Proposition 8 into the Pacific Ocean where it could swim with the fishes. On that auspicious day, I joined a crowd estimated of around two hundred people gathered at the North San Diego County LGBTQ Center where speeches were met with cheers.

Putting the exclamation point on our celebratory mood was a proposal from one woman to another. On bended knee with ring in hand, Kindra asked her beloved, Michelle, to be her wife. Tears of joy and overwhelming emotion choked her voice as she proclaimed her love, and the two cried together as the ring was placed on her fiancee’s finger. Get out the hankies!

I was so moved, the next day I decided to act upon a thought I entertained in 2008 when for a short time same-sex marriages were legal in California; I got my minister’s license and can now perform a wedding ceremony. I did it to become more involved in my community, to share in a couple’s happiness — straight or gay, and to support this hard won right. Plus, I thought I would really enjoy it.

To the surprise of many, the Ninth Circuit Court of Appeals acted with record speed to reinstate the right to marry and ceremonies have now been performed for eager couples ready to move on with this exciting stage in their lives. In a moment of serendipity, the aforementioned engaged women won a last-minute wedding package at the Del Mar Fairgrounds where they received food, drinks, the services of an officiant and access to a lovely arbor setting where they were legally united among friends. A few days later, a distant male cousin of mine from the Bay area married his love. Two women I know who got married five years ago during that small window of time when it was legal, asked me to officiate at the renewal of their vows.

I could go on about the battle itself or the long drive ahead to ensure equal legal treatment across all of the United States, but this message is meant to be personal. It’s stories like the ones above that give the fight meaning. The ruling affirms the love, commitment and future vision two adults share — irrespective of their gender, gender identification, gender preference, gender confusion, gender configuration, or gender whatever(!) – and treats it equally within the bounds of the law.

Now it is up to us as individuals to respect the institution of marriage by treating our wives and husbands with love and respect, honoring the spoken vows, and abiding by the laws of the land. For as the language in many ceremonies state in reference to this point, “Marriage…is not to be entered into lightly or in jest and only after much consideration.”

2 Responses to “From A to Zoe: The celebration continues”