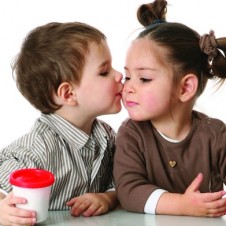 They say kids mature faster these days. I hear about girls aggressively pursuing boys and doing so at an earlier age than when I grew up. It’s partly our technological age of communication with revealing content front and center, kids being exposed to adult situations, peer pressure and bodies maturing earlier. I remember the point when playful interaction between classmates changed to something more and the boy who asked me to go steady.

My first recollection of boy/girl interest took place in second grade when a boy showed his affection by repeatedly punching me in the arm. Protests to my teacher fell on deaf ears, but eventually she switched up the layout of the classroom — problem solved. In third and fourth grade, the boys chased the girls, or vice versa, all in good fun. By fifth grade, the playful aspect took on the beginnings of maturity and curiosity. Many of the girls started to develop and subsequently, boy-girl parties started to form with pairings.

At this time, I noticed a shift in a male friend, Dan, who lived a few blocks away. We two were labeled the “smart kids” and, as such, found one another good company. During summer vacation we played Parcheesi and chess, splashed around in his above-ground pool with his best friend and strolled down to the ice cream parlor with our few cents to buy penny candy. Once, we combined our money and bought a soda. We got two straws and leaned in to sip, our foreheads almost touching, just like the teens we looked up to on TV. I sensed the shift.

I began to realize Dan liked me, not in the way he used to like me. Now, he “liked” me. His best friend also sensed the change and reacted jealously. It created conflict and that boy left the picture, at least while I was around. I liked Dan, but not as a first boyfriend. It created a small amount of tension, though not enough to stop our friendship.

Dan made no secret of his feelings and our classmates thought we made a great pair. They tried to push us together. Suddenly, I couldn’t be with him only as his friend. There was anticipation and hopeful expectation. When would I agree to hold his hand? Would I let him kiss me? I did neither. My classmates didn’t understand why I wasn’t agreeing to go steady when it was obvious (to them) we were meant for each other.

Liking Dan as much as I did made it hard to explain why our friendship couldn’t be something more. My female classmates wanted the boys to show interest. They wanted to hold hands. They wanted a little kiss. Dan was cute, smart and consistently vocal about his interest. Notes were passed in class. My disinterest to further our pairing didn’t make sense to any of them.

The decisive moment came when our class took a field trip to a local camp to spend a few nights. We visited the nature center, took hikes and played Capture the Flag. The girls’ and boys’ cabins were separate, but we dined and had free time together. It was during a free moment in the lodge that we sat in a large circle on the floor and played Spin the Bottle. There were almost thirty kids there. When it was Dan’s turn to spin, the bottle pointed directly at me. What were the chances! His face brightened in amazement and joy. Excitement peaked in the room as he approached. They were rooting for him, for us. I heard the kids groan as I turned my head to let him kiss me on my cheek, instead of the lips. I couldn’t let him do it. As disappointing as it was for my friends to witness this moment, so ripe with potential, I knew it would be devastating to lead him on and spurn him later.

No one knew I had a crush on a girl.

To be continued. Stay tuned!