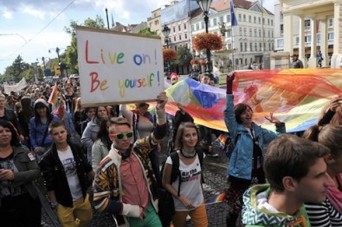 Each year, the Human Rights Campaign (HRC) compiles and issues a report detailing LGBT inclusion in the workplace called the Corporate Equality Index (CEI). Large corporations are graded on their performance regarding issues important to the LGBT community, equal rights workers, and those who concern themselves with corporate reputation, among others.

The CEI is created from information gathered from surveys that are sent out and returned from Fortune 1,000 companies and 200 top law firms. When corporations choose not to respond, the HRC compiles the information anyway, giving concerned individuals answers to compare one company’s policies against another’s while pushing for greater cooperation from those who have chosen to remain silent. Smaller companies with 500 employees or more may voluntarily request a survey.

Survey data reveals corporate policy in areas relevant to equal treatment and support of the LGBT workplace, their spouses, and the community. They include: non-discrimination policies, equal benefits, organizational competency, and public commitment. Points are added for corporate compliance with a top score of 100. Points are subtracted for known activities that undermine LGBT equality, making it possible for a corporation to incur a reduced or negative score.

Since its inception in 2002, the CEI has continued to evolve. Originally, the survey was sent to Fortune 500 companies, but has since expanded. Topics covered also have expanded, and fortunately, many companies have grown in their commitment to LGBT inclusion. The HRC reports that this year marks a record 366 companies earning the 100 score, which also earns them the coveted designation of “Best Places to Work for LGBT Equality.” You can access the entire report here.

In 2013, Barilla America Inc. came under fire when Guido Barilla made remarks unfriendly to the gay community. A product boycott spurred by media attention brought an apology from Barilla. It also sparked positive response from competitors and other corporations who reached out to the LGBT community. This public airing is one example of how LGBT issues can affect behavior on a global level. Barilla scored 100 in this year’s index.

On the positive side, eighty-nine percent of Fortune 500 companies include sexual orientation in their policies. While it is significant to report that 66 percent of these companies include gender identity in company policy protections, the HRC makes special note that this does not always translate into transgender inclusion in practice. It is outrageous that 29 states can fire an LGBT employee, and to be precise, make that 34 for being transgender.

As a part of the overall population, LGBT inclusion is a weak link in the struggle for basic civil rights. Civil rights are human rights, making 100 percent LGBT inclusion a priority among those who fight against discrimination. Having access to the CEI helps sharpen the target.