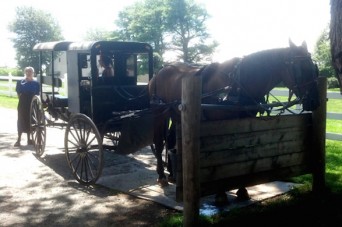 Lancaster County in Pennsylvania is home to a large Amish population. My sister and I recently visited the area and were intrigued by the number of horse drawn buggies sharing the road with modern cars. It seemed a fun idea to take a buggy ride, during which we were encouraged to ask our driver everything we wanted to know about Amish culture.

Prior research gave us background into the history and differences between the Amish and Mennonites, who also populate the area, and variances in how strictly they adhere to the old, “plain” ways. Amish men, women, and children wear traditional modest clothing, mostly in blue, black and white (no prints), and farm the land much as their ancestors have done for centuries. Homes can use propane, but no electricity. Residents can be driven in cars, but do not own cars. The bicycles I saw did not have chains, but instead were more like scooters that needed a push. I wished I had asked why this was, as geared chains did not seem to be outside traditional bounds.

It’s not unusual for women to find employment in the many antique and tourist shops that dot the surrounding towns, while in addition to farming corn, tobacco and soy beans, men tend to have home-based businesses like building cabinets. The children are schooled in one-room schoolhouses to the age of 15. Then they return to the farm to support traditional Amish living.

When asked about marriage, our driver and guide, Elizabeth, age 58, told us that she married late (at 31) to a widower with three children. They had two more kids and now have twenty grandchildren. She said the Amish are encouraged to marry between the ages of 20 and 25. However, some men and women do not marry and that is acceptable.

Knowing this, I inferred how gays integrate into their social order. They can adopt the Amish lifestyle or leave their group and join another that is less strict. They can also leave Amish living altogether and join the practices of the world at large. Without having to reveal their sexual preference, I understood that gays have choices within their community. Elizabeth assured us that those who leave to do their own thing are not shunned and that visits and letters are common.

She also pointedly informed us that contrary to a popularly viewed TV program, Amish teens do not have a year off to go crazy. Given her emphatic denial, I decided not to ask her about gays in the community. Another reason I didn’t ask was I had a better resource. I returned to my Airbnb rented room where I had become friendly with the two gay men who owned the charming stone house built in 1752. One of them claimed half Mennonite heritage and had left the fold years ago before he came out to his family. At first, he said, they were open and accepting, but later some members expressed discomfort with his lifestyle.

That evening, as we relaxed in the yard overlooking Pequea Creek, I learned that Amish gays were living nearby and secretly seeing one another. One fellow they described as “a flamer” had made it a bit harder for the less obvious to pay him visits. In any case, as I surmised, gays may choose celibacy or quietly see other gays using an underground gay network.

As we know, couples from all corners of the earth give birth to gay women and men, and nothing changes that fact—not their gods, ethnicities, socio-economic status, politics, legalities, or other factors. The Pennsylvania Amish are surrounded by modern American society and their children see for themselves how other lifestyles exist beyond their own. When we asked Elizabeth if she ever longed for or was curious to experience modern ways, she assured us she was happy with her chosen life. Though it may be difficult for a gay child of any religious order to leave their familial traditions, here in the United States possibilities exist for a full life, which is not always the case in other countries.